All Things To All Men 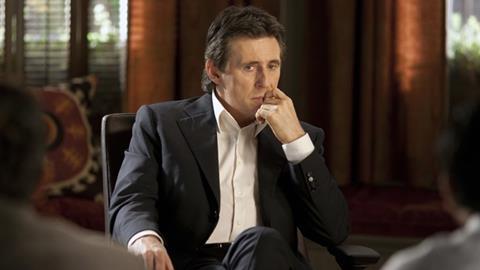 A slickly shot and nicely performed British crime film, All Things To All Men suffers from coming hard on the heels of other (and slightly bigger budgeted) London-set thrillers such as Welcome To The Punch and The Sweeney, and while it delivers in terms of a complex conspiracy plot packed with devious double-crossing, at times it is simply too labyrinthine for its own good.

But despite a sense of familiarity and the over-arching need to make things a little too complicated, there is still much to enjoy. Rufus Sewell is quite splendid as a devious detective; Gabriel Byrne nails his London gang lord role; Terence Maynard is cool personified as Sewell’s police partner, and Julian Sands offers up a nice cameo as Byrne’s mob enforcer (the pair memorably starred together in Ken Russell’s 1986 film Gothic). The film also makes great – if rather clichéd – use of a series of London landmarks, those does help to underscore its modest sense of cool.

The film has a relatively strong marketing push in the UK where the familiar faces could see a goodish response, but in truth All Things To All Men’s best marketplace is likely to be in home entertainment when the combination of crime and strong British actors are a strong combination.

Sewell plays maverick London detective Parker (we know he is a bit of a rebel because he wears a black trench coat and drives around in a black Range Rover) who is hunting smooth jewel thief Riley (Toby Stephens, looking the part, but favouring a grim, unsmiling, persona  when a bit of louche charm would have worked better). Parker blackmails London crime boss Joseph Corso (Byrne) into setting up a trap for Riley, but things spin out-of-control as the three men vie to take the upper hand with Riley caught in the middle of the machinations.

Just like Welcome To The Punch and The Sweeney, the film – thanks to Howard Atherton’s lush cinematography – makes London look vibrant, steely, and cool, though the film does favour ticking off landmarks (exemplified by its action climax inside Battersea Power Station and Stephens planning his next job while inside a pod on the London Eye) as well as providing stunning backdrops.

Rufus Sewell brings just the right amount of playful charm to balance the nastier antics of his rogue cop role, and gives the films its drive and energy, working especially well with Terence Maynard (smooth coat, shades and a jazz flat cap) as Sands, his long-time friend and partner. Gabriel Byrne is equally fine as the London gang boss, while the likes of Leo Gregory, James Frain and Julian Sands help give the film is sense of gravitas.

Sadly All Things To All Men lets itself down when it comes to a strong female character. There isn’t one. The impressive Elsa Pataky (from the recent Fast & Furious films) has the charisma and beauty to demand more screen time, but her role is poorly developed and then rushed into a climactic sequence to limited emotional effect.

The plot – which has references to LA Confidential  - gets overly complex at times (there is a lumbering side-plot about Parker owing millions to a Turkish gang boss because he slept with his girlfriend, that bemuses rather than intrigues) which is a shame given the talent available and the attractive filming style.But then trick here is to sit back and enjoy a series of fine actors impressively going through their motions.