Marvel/Disney’s superhero team up records year’s highest opening and the biggest ever opening for a superhero film in the UK. 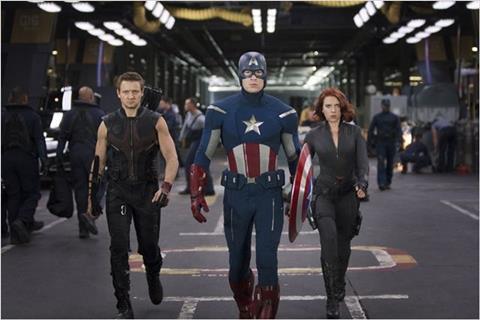 Marvel’s The Avengers (Avengers Assemble in the UK) dominated the UK box office on its opening weekend, flying straight into top spot with an epic $25.7m (£15.8m) haul.

Disney’s superhero team up achieved the third biggest Thursday opening of all time of $4.1m (£2.5m) on its way to its record-breaking debut, the highest ever for a superhero film in the UK and the second biggest four-day opening ever behind Harry Potter And The Order Of The Phoenix’s $26.8m (£16.5m). Its opening was the biggest recorded at the UK box office since Harry Potter And The Deathly Hallows: Part 2 conjured $38.7m (£23.8m) last July.

Other records smashed include the biggest ever Disney three-day weekend and the distributor’s strongest single day taking of $8.8m (£5.4m).

While the rainy weather may have played a factor, it’s still an extraordinary performance that sets a high benchmark for the year’s other superhero films - The Amazing Spider-Man and The Dark Knight Rises - to follow.

Lionsgate’s Salmon Fishing In The Yemen stayed second for a second consecutive week with an impressive holdover performance as it hooked $1.8m (£1.08m) from its 427 sites. Lasse Hallström’s adaptation of Paul Torday’s novel stands at $5.2m (£3.2m) after ten days in play and has proved to be smart counter programming from the distributor in the face of the mighty Avengers.

Remaining resolute in third was The Hunger Games after corralling a further $1.2m (£744,000) in its sixth week for $36.5m (£22.4m). Lionsgate’s adaptation of Suzanne Collins’ best-selling young adult novel may soon be overtaken as the year’s highest grossing film, but can still be satisifed with its highly impressive performance which bodes well for its subsequent instalments.