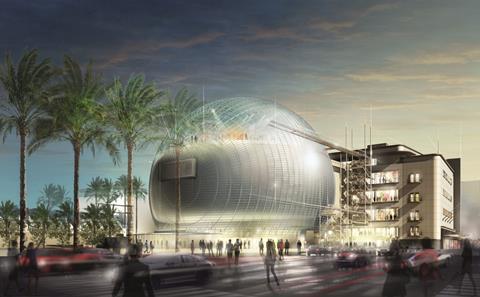 AMPAS exists outside of Los Angeles. It has for many years, but there is a new focus on developing its international activities, particularly in Europe.

The approach was evident recently in London, as AMPAS CEO Dawn Hudson joined chancellor of the Exchequer George Osborne at an 11 Downing Street event in late October to welcome new AMPAS members. Guests included full-time Brits such as Tom Hooper and Rosamund Pike, as well as visitors to the UK such as Lupita Nyong’o, in London to shoot the new Star Wars film.

“The board has such an appetite for increasing our presence internationally, to show the world what we’re about,” says Los Angeles-based Hudson over tea at The Ritz in London. “The film-making community has become more global and we connect internationally.” Some 10% of AMPAS membership votes from outside the US and a big part of that is in the UK. As Hudson notes: “It’s a renaissance in London film-making.”

Hudson has been spreading the word that AMPAS wants to identify new members around the world. Academy members may now sponsor one new member each year for consideration.

Another key move in October 2013 was to hire Carola Ash for the new London-based post of director of Europe.

“I couldn’t have started at a better time; every time I suggest something to Dawn, she says, ‘Why haven’t we done that before?’” says Ash. “We have a very strong membership here. One of the things members love is to connect more with what’s happening in LA. They feel more connected with the mothership now.”

Ash has spearheaded three big events in the last year, including the new members party, a nominees lunch and a real-time, late-night viewing party for the Oscars at Soho House. AMPAS has also started weekly screenings in London for its members, as a way of connecting them more frequently. “It’s feeling more fun and lively,” Ash says.

AMPAS is one of those organisations that attracts a lot of global goodwill. “The Academy represents the movies and people love the movies,” Hudson says.

She knows what a special position AMPAS has in the world — hundreds of millions of viewers watch the Oscars every year. “It’s a heritage brand that’s not just respected and revered; it has stayed relevant for 87 years.”

Part of the reason for that relevance is what the Academy does on the other 364 days of the year when it’s not handing out those gold statuettes.

“We’re increasing the effectiveness of our year-round activity,” Hudson says. “Our industry can be even prouder to know all the work that’s behind the scenes.”

Important year-round programmes include the Academy Nicholl Fellowships in Screenwriting (two of this year’s four fellowships went to UK writers).

There are other educational programmes, and of course the Academy’s Science & Technology Council brings together industry experts — recently tackling issues such a digital workflow and preservation standards, creating the Academy Color Predictor app (free on iTunes), and developing the industry standard Academy Color Encoding System. “It’s the Academy of Motion Pictures Arts and Sciences, and we take the science part very seriously,” says Hudson, who has been CEO for three-and-a-half years.

Most people do not realise just how crucial are the Academy’s library and film archives, with the latter boasting 185,000 items. Part of that collection — and more — will be included in the new Academy Museum, which saw its plans greenlit in October 2012 and a full fundraising push is under way. More than $225m in pledges (towards a goal of $300m) has been raised from 1,000 donors.

The museum, which could open as soon as 2017, will be situated next to the LACMA campus on Wilshire and Fairfax in Los Angeles. Renzo Piano is the architect in charge of updating the existing landmark Wilshire May Company building. David Geffen has already committed $20m to fund the 1,000-seat David Geffen Theater.

The internet also helps the Academy to connect globally through the Oscars.org and Oscars.com websites, and increasing social media activity. “Our outreach went from a college graduate posting on Facebook every few days to now having 5 million-plus followers… More people are able to connect to the Oscars,” Hudson says. “Some of our members may be the film elite, but we don’t have to be exclusionary and inaccessible.”