'Goodnight Mommy': the directors of Austria's Oscar submission on their creepy debut 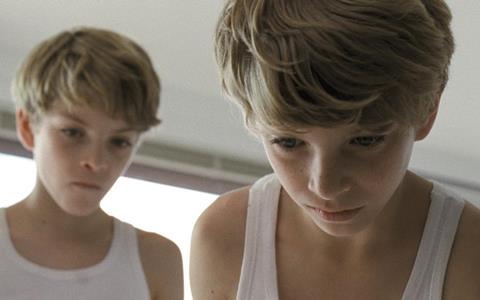 Veronika Franz and Severin Fiala were watching TV when they got the idea for their Austrian foreign-language Oscar submission Goodnight Mommy, about twins who become suspicious when their bandaged mother returns from cosmetic surgery.

“We were editing our documentary [2012’s Kern] and watching these reality soaps about women who have plastic surgery and are separated from their families for three months and come back with new faces, new everything,” says Fiala.

“It’s meant to be a very happy TV moment, but if you look closely at the faces of the children it’s not real joy. There was one episode when a child said to the father, ‘That’s not my mum.’”

Those sentiments form the backbone of Goodnight Mommy, the pair’s unsettling debut narrative feature about familial trust, which has made waves on the festival circuit since premiering at Venice 2014.

Audiences have lapped up the clever script, serpentine camera moves and eerie confines of the ultra-modern, well-lit house – but it’s the performances that make the whole thing click.

Real-life twins Lukas and Elias Schwarz are more than a match for Austrian actress Suzanne Wuest, who plays their TV presenter mother (there is no father on the scene). Their casting was front of mind when the filmmakers wrote the script.

“It’s the first time they have ever acted,” says Fiala. “We were doubting it would be possible to find nine- to 11-year-old twins in Austria, whereas our casting director said it wouldn’t be difficult because it was so specific and we could call schools.

“We found 125 pairs of boy twins aged between nine and 11. A lot of them were really talented. We came down to three pairs and had a hard time choosing the right ones.”

Franz adds: “The task was to find both twins who were really good. Sometimes one was really talented but the other one wasn’t. They were identical but not both talented, so this was the task.”

Franz and Fiala shot in summer 2013 in lower Austria, near the Czech border.

“We had to shoot in the holidays for the children,” says Franz, who is married to celebrated Austrian filmmaker and Goodnight Mommy producer Ulrich Seidl.

“We tried to be very careful. It’s hard work and if the children were [bored] we would have had no chance. So we didn’t hand out the script and we told them their mum comes home and she’s behaving strangely.

“Day-by-day, shooting chronologically, we gave them a little bit more information. It was like a detective story for them.”

“We had to find children who were tough and courageous,” adds Fiala. “We kept a very light atmosphere on set. They had a great time and said it was the best summer of their lives.”

The chilling tone of Goodnight Mommy inevitably recalls Michael Haneke, Austria’s Oscar-nominated standard-bearer of dread. There is a giant reveal towards the end and a clue lies in the Austrian title, Ich Seh, Ich Seh.

“It’s very different when people get it,” says Franz. “For example, Severin’s mother has seen the film three times and she still doesn’t get it. We found out in the editing process that people see and watch films [in different ways] and that’s why we focused on making a film that has some substance whether you get it in the first minute or never. It’s not only about twists.

“We wanted to tell the first part of the film from the point of view of the children and it’s quite difficult to [find out more] about the mother,” said Franz. “So that’s why we used the house to expand her character and tell more about her.”

The duo filmed at the home of a motor-racing promoter, slyly using the modernist architecture and abundant natural light to shroud the story in mystery. An imposing, blurred portrait of a woman in the hallway adds to the disquieting ambiance.

Olga Neuwirth’s sparse score intensifies things further. “She is a female composer, which is rare,” says Franz. “Austria is a place of opera and classical music and even more than in film it’s very male-dominated. She created this almost horror film music.”

Unlike their characters, the filmmakers are completely open with one another.

“You have to have a vision of what the film should look like or be or what it should do,” says Franz. “We found out over the years that we shared a vision.”

“We fight in the editing room,” says Fiala. “On the doc [Kern, about Austrian filmmaker Peter Kern], we fought about whether [a shot of someone leaving a room] should be one minute earlier or later. We fought for seven hours and when we watched the film again and we couldn’t remember who won the argument. At the time it’s the most important thing possible – but we never take it personally.”

“But it’s only in the editing room, not when we write or shoot,” adds Franz. “We are each other’s first audience. If I had an idea and Severin said it was bullshit, I would fight. But basically if he thinks it’s bullshit, I would trust him.”

During the shoot Fiala and Franz did everything together. “We never thought about splitting up duties when directing the film,” says Fiala. “It made us a lot more confident in defending ideas. Filmmaking is mainly about solving problems and you can do it faster with someone else.”