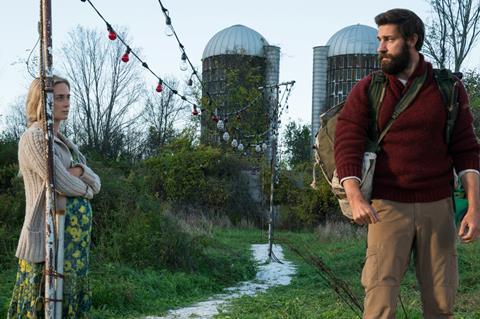 John Krasinski’s horror film and recent SXSW opener A Quiet Place became the breakout hit of the year-to-date as it toppled Ready Player One en route to a chart-topping $50.2m in North America through Paramount Pictures.

The film reportedly cost $17m excluding marketing spend and compares well against the $33.4m February 2017 debut of global hit Get Out. It arrived in 3,508 theatres, performing above expectations to deliver a much-needed success for the studio. Added to the $21m international haul from 40 markets, the global tally after the first weekend stands at $71m.

Krasinski stars alongside his wife Emily Blunt as a couple who flee an alien invasion with their children and find themselves preyed upon by a species that hunts by sound.

Black Panther consolidated its status as the third highest North American release of all time. On Friday the Marvel Studios release reached $659.2m to rank only behind Star Wars: The Force Awakens and Avatar on the all-time pantheon, and by the end of the weekend the film stood at $665.6m following an $8.7m haul.

Warner Bros’ sci-fi Ready Player One has become a $391.3m global hit for the studio and director Steven Spielberg. It fell 41% and one slot to number two in its second weekend, adding $24.6m for $96.5m.

Roadside Attractions’ I Can Only Imagine – already the distributor’s biggest hit in North America – slid 20.2% and two places to number six in its fourth weekend, adding $7.8m for $68.5m.

LD Entertainment’s sports drama The Miracle Season with Helen Hunt opened at number 11 on $3.9m from 1,707. Amazon Studios released Lynne Ramsay’s dark thriller and Cannes 2017 premiere You Were Never Really Here starring Joaquin Phoenix at number 29 on $132,829 from three venues for a powerful $43,304 average. Andrew Haigh’s Midwest drama Lean On Pete opened via A24 at number 41 on $46,975 from four sites.