'Ant-Man And The Wasp' big in China, soars past $500m worldwide (update) 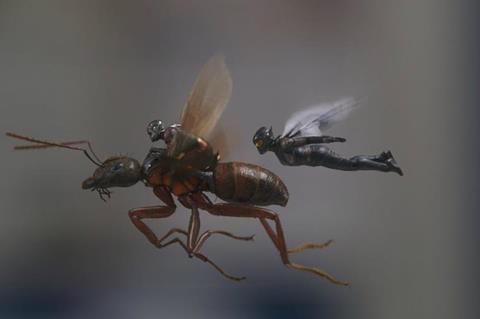 Ant-Man And The Wasp

AUGUST 27 UPDATE: Ant-Man And The Wasp surged past the $300m international and $500m global marks as it flew into China on a confirmed $68.2m over the first three days to rule weekend box office.

The Meg glided past $400m worldwide via Warner bros and Gravity Pictures and rests on $143m in China, while Crazy Rich Asians impressed in Southeast Asia, and Paramount/Skydance’s Mission: Impossible – Fallout reached $344.8m.

The $68m China debut ranked as the fourth highest debut in the territory for a Marvel Cinematic Universal release and the third highest by a Western film so far this year, while the $7.2m Imax portion delivered the highest ever August debut there.

South Korea now ranks as the film’s second highest market on $42.4m, followed by the UK on $19.8m, Mexico on $15m, and Australia on $14.6m, with Japan still to come. Paul Rudd and Evangeline Lilly star.

Disney’s Christopher Robin held on to top stop in its second weekend in the UK where it has reached $8.6m. The drama added $7.2m internationally from 32 territories and climbed to an early $36.4m, and $112.7m worldwide. It opens in Italy this week.

Incredibles 2 used a $9.1m international weekend in 28 to climb to $545.1m, and $1.141bn worldwide and rank as the 19th highest release overall and the third highest animation in the all-time pantheon.

The giant shark action thriller starring Jason Statham and Li Bingbing has overtaken Rampage to rank as Warner Bros’ highest release for the year-to-date in Latin America, and held on to number one in 17 markets including Mexico, Brazil, and Australia.

Driven by strong debuts across Southeast Asia, Crazy Rich Asians brought in a further $6.1m from 18 markets as the early tally climbed to $7.3m, and $83.9m worldwide factoring in $76.8m in North America, where the rom-com stayed top in its second session.

The film ranked as the top US release in Taiwan and Hong Kong, where it opened on $451,000 and $299,000, respectively. Crazy Rich Asians opens in Australia this week, followed by the UK on September 14.

Jurassic World: Fallen Kingdom added $1.9m from 40 for $882.8m and $1.296bn worldwide. The tentpole continues to play well in Japan, where it added $1m in the seventh weekend for $68.9m and has overtaken the lifetime total of Star Wars: The Last Jedi.

UPDATED: The Equalizer 2 earned $11.3m from 41 markets as the international running total climbed to $47.7m. The revenge thriller debuts in Russia on September 6, Italy on September 13, and Japan on October 5.

Mission: Impossible – Fallout from Paramount and Skydance Media added $13m from 61 markets as Tom Cruise and his crew shot up to $344.8m to track approximately 17% ahead of Mission: Impossible Rogue Nation for the same group of markets by the same stage.

The Spy Who Dumped Me grossed $5.8m from 74 markets for $20m. The action comedy debuted in the UK and South Korea on $1.3m each, and stands at $2.4m in Australia after three sessions, $2m in the Middle East after four, and $2m in CIS after three. Germany is this week’s new market.

Mark Wahlberg action thriller Mile 22 opened in 11 international territories for $5.6m, led by the Middle East on $2.4m and Indonesia on $1.5m. The film’s early worldwide haul stands at $31.2m and it debuts this week in Australia and New Zealand, Mexico, and France, while the UK is set for September 19.

Survival drama Adrift with Shailene Woodley and Sam Clafin opened in Taiwan on $252,000, and stands at $21.9m overall. It arrives this week in Italy, with the China date yet to be set.

The Darkest Minds grossed $2.8m from 47 markets for a $23.1m tally. El Angel, from Fox International Productions, retained top spot in Argentina for the third consecutive weekend, adding $563,000 for $4.1m.