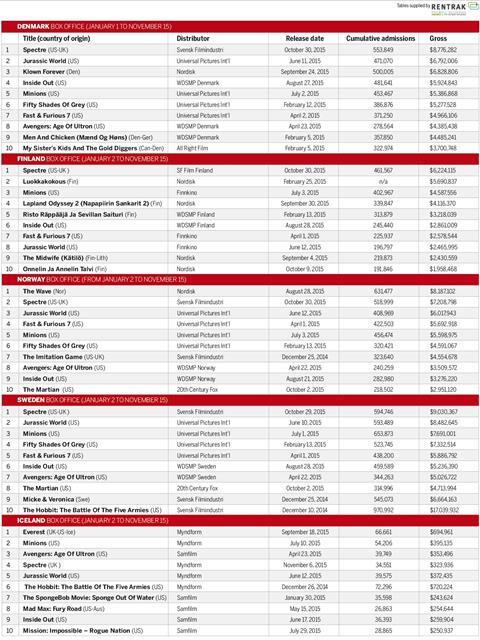 In Denmark, Nordisk’s hotly anticipated sequel Klown Forever is the top local film of the year as of November 2015, beaten only by blockbusters Spectre, released by Svensk, and Jurassic World, released by Universal.

The raunchy comedy, starring Frank Hvam and Casper Christensen, was again directed by Mikkel Norgaard. As of November 15, the comedy had grossed $6.8m.

The original went on to gross a whopping $12m following its December 2010 launch. Based on a popular Danish TV series that finished in 2008, the Klown films follow the antics of two thirty-something best friends.

Another local comedy, even more absurd in style - Anders Thomas Jensen’s Men & Chicken, released by Disney - is performing strongly with a gross of $4.5m to date.

One local disappointment this year has been Susanne Bier’s A Second Chance, which managed only $2m compared to nearly $5m for her foreign Oscar winner In A Better World.

In Finland, Taneli Mustonen’s school reunion comedy Luokkakokous has landed at number two in the charts to date with a gross of $5m, only behind Spectre and ahead of Minions.

Iceland has the best of both worlds - a local kingpin bringing English-language Hollywood spectacle, as Baltasar Kormakur’s mountaineering drama Everest (a UK-US-Iceland co-production) took the top spot at the local box office with $8.8m for Myndform.

The film won the top prize at Un Certain Regard in Cannes and could also get an awards-season boost as it is Iceland’s submission for the foreign-language Oscar race.

In Norway, Roar Uthaug’s The Wave - the first real Nordic disaster film - was a huge local hit for Nordisk, earning $8.2m to make it the fourth highest grossing film of the year to date.

The disaster story, which imagines a frighteningly realistic scenario when a geological event triggers a tidal wave headed for a Norwegian fjord town, can be proud. It also represents Norway in the foreign-language Oscar race.

In Sweden, the only local film to crack the top 10 to date is Micke & Veronica (aka Last Chance) in ninth position with a gross of $6.7m.

Svensk released the romantic comedy, about an upper-class woman who falls in love with a carpenter, during Christmas week last year.