SCREEN SUBSCRIBERS: Weak local titles are suffering in the face of particularly strong product from Hollywood and a dwindling art-house sector in 2015. 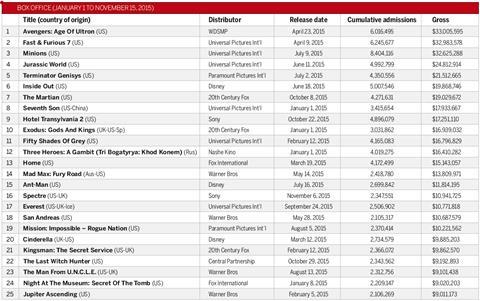 For the first time since 2013, Russia is likely to end the year without a locally produced film in the territory’s top 10 as US titles remain dominant as ever.

Only nine Russian films register in the highest-grossing 50 films of the year to date. The most successful is Nashe Kino’s release of animation  Three Heroes: A Gambit, which grossed $16.4m to November 15.

The second most popular local film this year is the latest outing for the Yolki comedy franchise. Yolki 1914 is set during the First World War and distributed by Timur Bekmambetov’s Bazelevs.

Local titles have faced stiff competition from strong US fare in 2015, with October the worst month for homegrown films so far this year. Local titles grabbed a market share of 10.7%, compared to an average of 19% for the year to date.

According to market analysts Movie Research, non-Russian films posted the highest monthly takings in October - over $51m - for the past five years, with The Martian, released by 20th Century Fox on 2,246 prints, taking more than $17m (rub1bn) to date.

However, Seventh Son, directed by Russia’s Sergey Bodrov and produced by the US’s Legendary Pictures and China Film Co, grossed a whopping $17.9m in Russia, the film’s biggest European territory by far.

While the mainstream commercial Russian releases have stiff competition from the mass of US titles, art-house cinema in Russia faces an even bigger battle. This year has seen art-house distributors West, Caravella DDC and Cinema Without Borders all close.

The one bright moment has come from the return to the market of distribution veteran Sam Klebanov with the bluntly named outfit Arthouse. With backing from the US-based Lorem Ipsum Corp, Arthouse acquired all three major festival winners from Berlin, Cannes and Venice: Taxi, Dheepan and A Pigeon Sat On A Branch Reflecting On Existence.

“Audience tastes are changing in Russia,” suggests Daniel Goroshko, head of acquisitions at St Petersburg-based distributor A-One Film, which has Paolo Sorrentino’s Youth in the cinemas.

A-One Films has limited its annual release line-up to around 11 films and will concentrate on bigger titles like Mia Madre, Victoria and this year’s Cannes opener Standing Tall (La Tete Haute).

Indeed, the challenging market conditions in Russia have prompted the pan-European marketing network European Film Promotion to join forces with the local VoD platform Ivi to launch an online festival of previous European Oscar submissions - from White God to Kontiki - to stream in the wake of EFP’s showcase of European cinema in St Petersburg in October.