Universal executives confirmed on Friday that the action smash had crossed the milestone in an industry record 17 days. 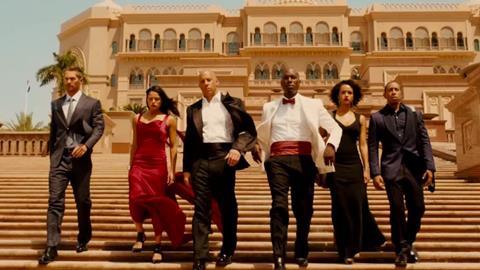 The film, known as Furious 7 in North America, stood at $1.009bn through Friday, becoming the first Universal title to cross the mark in its initial release. Jurassic Park reached $1.044bn after a 3D re-release.

The international running total through Universal Pictures International is $735.2m heading into a third weekend where it is almost certain to retain pole position.

By the start of this week the film had already overtaken the final international lifetime totals of all its six predecessors.

The result pushed the running total for the franchise to $3.392bn.

“What started as a small film about the street racing sub-culture of East Los Angeles has become a global phenomenon with Furious 7 shattering records in so many territories around the globe,” said president of international distribution Duncan Clark.

“We’re thrilled to celebrate this accomplishment with our colleagues and distribution partners throughout the world, who have made these extraordinary results possible.”

Crime mystery Child 44 opens in 23 territories day-and-date with North America this weekend – except Russia, where authorities have banned the Soviet-era serial killer tale and claim it is historically inaccurate.

Fox International’s The Longest Ride stands at an early $4.1m, while DreamWorks Animation’s Home has amassed $118.8m and Kingsman: The Secret Service $269.7m. Night At The Museum: Secret Of The Tomb has grossed $248.9m.