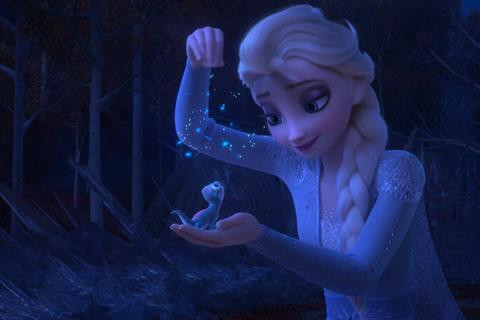 NOVEMBER 25 UPDATE: The writing was on the wall that this was going to be a momentous opening weekend when Disney began announcing opening days records on Thursday and so it proved to be as Frozen 2 raced to $358.2m worldwide from its first five days, and established the highest international launch for an animation on $222.8m.

UPDATED: Frozen 2, the latest tentpole in what continues to be an extraordinary year for Disney – Star Wars: Episode IX – The Rise Of Skywalker launches worldwide next month – earned $222.8m from 37 international markets in the highest international debut of all time for an animation, destroying the previous mark $152m set By Ice Age: Dawn Of The Dinosaurs.

Idina Menzel, Kristen Bell, Josh Gad, Jonathan Groff and reprise there roles and Evan Rachel Wood joins the voice cast in the tale of the headstrong princess. 2013’s Frozen finished on $873.5m international box office and ranks as the highest grossing animation of all time worldwide on $1.274bn.

The Good Liar with Helen Mirren and Ian McKellen earned $1m from 20 and stands at $5.7m internationally and $17.5m worldwide. The thriller has grossed $4.2m in the UK after three weekends and arrives in Germany this week.

The Addams Family has reached $176.4m worldwide after a $4m session, of which $3.7m came from international markets and boosted the tally to $81m. Abominable from DreamWorks Animation and Pearl Studios stands at $99.2m following a $1.5m session and has reached $174.3m worldwide.

Action release Harriet starring Cynthia Erivo as an escaped slave who returns to help others escape to the free states opened in the UK, its first international market, and earned $152,000.