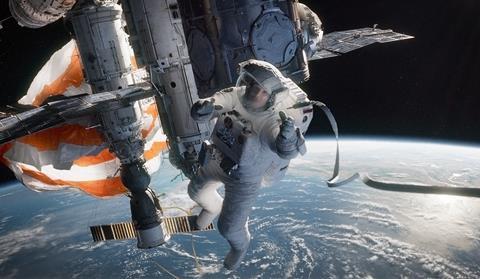 Achieving what the likes of Star Trek Into Darkness, Oblivion and Elysium couldn’t, Gravity enjoyed a sensational second weekend to retain the top spot at the UK box office.

The arrival of The Hunger Games: Catching Fire this week means that Gravity is unlikely to record a third straight week at number one. However, given its performance so far, it has every chance of posting another strong hold and crossing £20m by the end of next weekend.

According to latest figures from DCM, October admissions totalled 11,865,573 this year, a 29.5% drop compared to last October. This was to be expected given the record-breaking performance of Skyfall that started on Oct 26 with a mighty $32.4m (£20.1m) debut.

This year is likely to end down on last year, but how far down will depend on how the likes of The Hunger Games: Catching Fire, Frozen and The Hobbit: The Desolation of Smaug perform.

Stephen Frears’ comedy-drama is now up to a strong $11.8m (£7.3m) and is proving to be savvy counter-programming from Fox, having grossed $4m (£2.5m) over the past seven days.

Also for Sony, Captain Phillips will cross the £15m mark in the coming days.

Rounding off this week’s top five, Entertainment’s Lee Daniels’ The Butler served up a $1.3m (£790,000) debut from its 286 sites based on confirmed weekend figures from The Weinstein Company.

Given the US-centric nature of the film, it’s a healthy start and marks director Lee Daniels’ best-ever UK bow, topping the $421,000 (£260,921) recorded by Precious albeit from significantly less sites at 47.

Well-received British horror In Fear failed to scare up audiences after debuting with $67,000 (£41,335), including previews, from its 56 sites through StudioCanal.

eOne’s The Family and Artificial Eye’s Palme d’Or winner Blue is the Warmest Colour both receive wide releases, while Eureka’s Computer Chess and Anchor Bay’s Vendetta are among the films receiving a limited release.