'Guardians Of The Galaxy Vol. 2' rules international on $101m (update)

Marvel Studios tentpole scores number one debuts in all but three of its 37 territories. 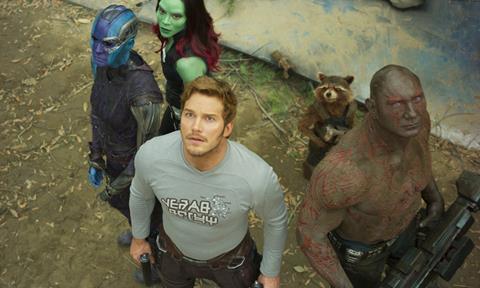 The sequel directed by James Gunn was number one in all 37 of its territories except Portugal, Turkey and Vietnam, and opened ahead its 2014 predecessor in all markets except for Belgium. It is currently active in 58% of the international footprint.

In Latin America, Brazil delivered $6.9m for 50% market share, 75% ahead of Guardians Of The Galaxy.

The superhero tentpole starring Chris Pratt, Zoe Saldana, Dave Bautista, Vin Diesel and Bradley Cooper will open in 16 additional markets including China, Russia, South Korea and Japan this week. Guardians Of The Galaxy Vol. 2 will debut in North America on May 5.

It earned $5m from 176 IMAX screens in 35 markets, a week prior to the North American and China launches. The UK led the way on $1.4m for an increase of 50% over the first Guardians film.

Like the UK, most markets saw a solid double-digit percentage increase in IMAX over the original, including a 139% rise in Turkey, 80% in Mexico and 73% in France.

Guardians Of The Galaxy Vol. 2 opens next weekend on 700 additional IMAX screens in 31 markets, including China and North America.

Beauty And The Beast added $17.2m for $662.4m internationally, bringing the global sum to $1.14bn. The live-action musical overtook Transformers: Age Of Extinction, Skyfall, The Lord Of The Rings: Return of the King, and Transformers: Dark of the Moon to rank as the 13th highest grossing film of all-time.

In North America, where it has grossed $480.1m, it passed Star Wars: Episode I to rank as the ninth highest grossing film.

UPDATE: The Fate Of The Furious stormed past $1bn worldwide as a further 73.9m from 69 territories in the third international weekend propelled the running total to $873.5m.

The tentpole ranks as the tenth biggest international release in history and has stayed top in North America, where it has amassed $193.3m.

China added $22.1m for $363.5m (2.43bn RMB) as the action tentpole overtook the 2.42bn mark set by Furious 7 to rank as the biggest foreign film of all time in China and the second biggest of all time behind The Mermaid on 3.4bn RMB.

Click here for full report on The Fate Of The Furious.

UPDATE: DreamWorks Animations’ The Boss Baby continues to rise in the box office after earning a further $17.9m in 72 markets for $250.5m internationally.

The family film delivered strong holds in several markets including a 51% increase over the opening weekend in Holland. Spain and Poland were each down only 16%, with the film in second place in both markets. The Boss Baby is now DreamWorks Animation’s biggest title of all time in Hong Kong, beating Kung Fu Panda 2.

Smurfs: The Lost Village added $11.7m this weekend in 62 markets. The animated film featuring the voices of Demi Lovato and Rainn Wilson stands at $117.8m.

Arka Mediaworks’s fantasy film Baahubali 2: The Conclusion smashed through global IMAX records after earning $2.3m from 66 IMAX screens for a per-screen average of $35,500.