‘Inside Out’ rules July Fourth weekend on $29.8m 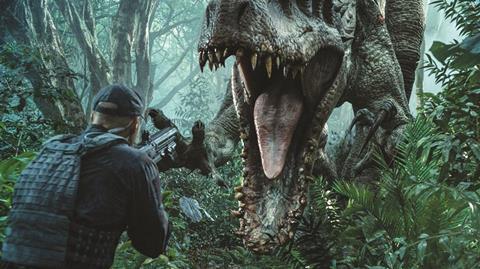 Inside Out added $29.8m to reach $245.9m in its third weekend of release and overturn Jurassic World by a slender margin — $530,000 — mirroring the narrow victory that Universal’s adventure inflicted on it the previous weekend.

Jurassic World added $29.2m in its fourth session to stand at $556.5m in North America and overtook Avengers: Age Of Ultron to secure fifth place in the worldwide box office pantheon on $1.385bn.

Studio sources said the budget was $155m and expected international box office to finish on three to four times higher than the North American total. The film is projected to take more than $5.5m from 363 North American Imax screens over five days and stands at $10.2m worldwide.

The three-day portion fell 42.8% against the inflation-adjusted $47.2m May 2009 opening weekend of Terminator Salvation, while the five-day comparison yields a drop of 41.2% factoring in the original’s $72.3m inflation-adjusted result.

The three-day portion fell 67.8% against the inflation-adjusted $40.1m three-day June 2012 debut of the original.

Two Sundance acquisitions are in the top 10: Fox Searchlight’s Me And Earl And The Dying Girl broke in on number nine in its fourth session and stands at $3.9m, while Dope slipped three places to number 10 and stands at $14.1m after three via Open Road.

Asif Kapadia’s Amy Winehouse documentary Amy parlayed a strong response to the recent Cannes world premiere to open via A24 on a sparkling $222,500 from six screens for a $37,083 average.