'Jumanji: The Next Level' rules international box office as 'Frozen 2' is sixth Disney film in 2019 to cross $1bn (update) 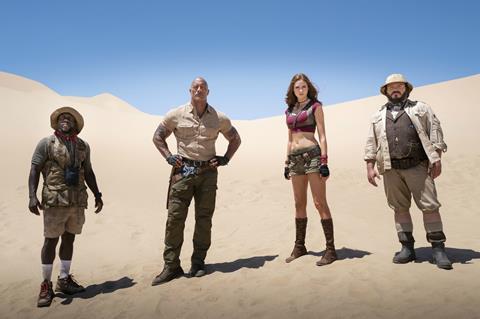 Frozen 2 has become the sixth Disney film to cross $1bn at the global box office in 2019 as Jumanji: The Next Level ruled international box office on an estimated $85.7m weekend haul.

Buoyed by debuts in 34 markets, the fantasy adventure starring Dwayne Johnson, Kevin Hart, Karen Gillan and Jack Black opened in the UK on $12.5m over five days including previews to beat the 2017 predecessor Jumanji: Welcome To The Jungle by 32%.

UPDATED: Knives Out from Lionsgate and MRC coaxed a further $14.2m from 73 markets as the early running total climbed to $84m, as worldwide reached $162.8m. Brazil was the best of the new openers with a $1.1m number one result.

China is the lead market for Rian Johnson’s all-star whodunnit on $27.3m and three weekends, while the UK has produced $10.9m after three to rank fourth, Australia $5.5m after three to rank second, and South Korea and Italy $3.2m and $2.8m in the second session respectively, both for fourth place.

UPDATED: Audiences continue to respond to Emilia Clarke and Henry Golding in Last Christmas as the rom-com crossed $100m worldwide. It earned $7.6m from 64 territories for a $66.9m running total, and $101.3m worldwide. The UK was the top holdover on $1.6m for $20.8m after five weekends.