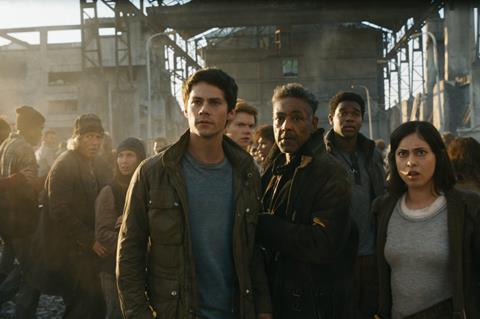 JANUARY 29 UPDATE: Maze Runner: The Death Cure ruled the international weekend, surging by $64.6m from 70 markets to reach an early $83.9m, powered by a $22.2m number one debut in China.

UPDATED: Russia was next on $4.2m, where the YA adventure also debuted in first place, followed by South Korea on a $3.3m number three hold in the second session for $15.1m.

Three Billboards Outside Ebbing Missouri stands at $34.3m after an $8.5m session and arrived in Germany in fourth place on $1.1m. The UK produced $1.7m for $10.3m after three weekends and France stands at $2.8m after two.

The Shape Of Water grossed $3.3m for $13.9m and added $1.8m in director Guillermo del Toro’s home turf Mexico to reach $9.9m and stay top in the third sessions. The fantasy drama earned 13 Oscar nods last week and will roll out in the bulk of the international marketplace throughout February.

UPDATED: Jumanji: Welcome To The Jungle overtook the original Spider-Man at the weekend to become Sony’s fifth highest worldwide release. The adventure added $18.7m internationally to reach $484m and brought in $34.1m worldwide as the running total climbed to $823 to squeeze past Spider-Man’s $821.7m final tally. China is the lead market on $72.4m, followed by the UK on $46.2m, Australia on $34.8m, France on $25.9m, and Russia on $24.8m.

Insidious: The Last Key has become the highest grossing film in the horror franchise internationally as a further $7.3m from 53 markets propelled the running total to $81.1m. Insidious: Chapter 2 ranks as the second highest on $77.9m, then Insidious: Chapter 3 on $69.7m, and the original on $46.4m.

Oscar-nominated drama Call Me By Your Name has grossed $6.4m following a $1.9m weekend haul and opened in director Luca Guadagnino’s home country Italy on $979,000

Help, I Shrunk My Parents, a local-language film from Sony Pictures International Productions, added $1.2m to reach $3m in its second weekend in four German-speaking countries.

Steven Spielberg’s Pentagon Papers drama The Post grossed $10.4m through all distributors including the Amblin Partners network and select Universal territories for a running total of $24.7m. It added $4.6m for $4.7m through Universal, powered by a $3m number one debut in France, and $931,000 in Brazil. The film stands at $3.5m after two weekends via eOne in the UK.

Among the five new debutants, Denmark delivered $399,000. The UK generated a further $3.6m in the third weekend after a 20% drop to reach $20.9m and stay top ahead of new opened Maze Runner: The Death Cure. The second weekend in Italy brought $1.3m for $3.2m after two.

Padmaavat, the controversial Bollywood film that has stirred outrage and violence in India for its depiction of a romantic dream sequence, grossed $5.1m internationally and stands at $9.7m worldwide. The drama debuted at number 10 in North America.

All The Money In The World opened in 14 territories this weekend and generated $1.7m for $17m including the UK, where Sony is releasing. The drama crossed $2m in its firth weekend in France and opened in the Middle East on $401,000.

I, Tonya starring Oscar nominated Margot Robbie added $2.2m for an early $2.4m, fired up by a number one $1.8m debut in Robbie’s home turf Australia. The drama arrives this week in Russia.

Molly’s Game added $1.5m for $19.9m. In the fourth weekend the drama starring Jessica Chastain and Idris Elba brought in $242,000 in France via SND for $4.1m. It opens this week in Australia.