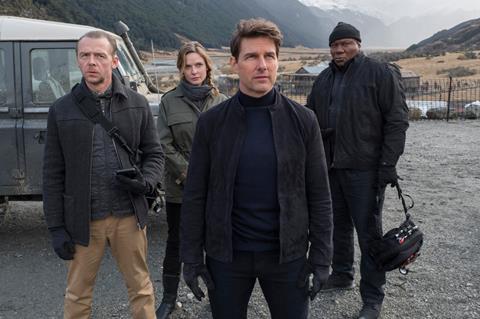 AUGUST 6 UPDATE: Mission: Impossible – Fallout held firm at number one in its second weekend in North American as the Paramount-Skydance action thriller added a confirmed $35.3m for $124.8m, while Black Panther crossed $700m on Sunday and became only the third film to do so.

The Tom Cruise vehicle Fallout fell a respectable 42.3% in its second weekend and stands at $329.8m worldwide.

Disney’s Christopher Robin arrived at number two through Buena Vista on $24.6m in 3.602 theatres. Ewan McGregor stars as Christopher Robin, a working class man who rediscovers his love of life when he encounters his old friend Winner The Pooh.

Action comedy The Spy Who Dumped Me from Lionsgate and Imagine opened at number three on $12.1m in 3,111 sites. Mila Kunis and Kate McKinnon star. Fox’s sci-fi thriller and YA adaptation The Darkest Minds arrived at number eight on $5.8m in 3,127 venues.

Sony’s The Equalizer 2 also dropped two, to number five, grossing $8.8m for $79.8m after three weekends. Pixar’s Incredibles 2 ranks ninth on $583.1m after eight sessions. It ranks as the highest grossing animation in North America and the ninth highest overall.

Marvel Studios’ Black Panther crossed the $700m mark on Sunday in its 25th week of release and become only the third film to do so. Its global tally is $1.347bn.

This week’s wide releases are: thriller The Meg through Warner Bros starring Jason Statham and Li Bingbing; and horror title Slender Man from Screen Gems with