UPDATED JULY 20: The $30m Chinese-language fantasy adventure secured top berth at the international marketplace ahead of Hollywood’s Minions, which was the biggest global earner of the session, as well as China’s superhero spoof Jian Bing Man and a bona fide US superhero in the shape of Ant-Man. 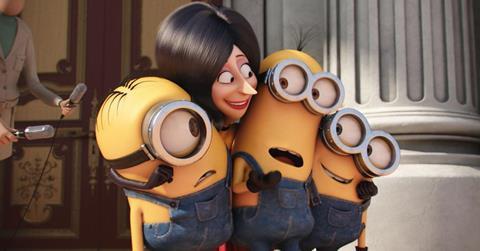 Hong Kong-based Edko’s $30m Chinese-language fantasy adventure Monster Hunt is based on the supernatural classic Strange Tales From A Chinese Studio and centres on the last descendant of the monster kings who tries to unite his race with humans.

Bai Baihe stars in the live-action film, directed by Shrek The Third co-director Raman Hui. The film grossed $72m over the weekend to stand at $99m.

UPDATED: Universal and Illumination’s Minions was the biggest Hollywood film outside North America thanks to a confirmed $66.1m gross that held off a $57.2m debut from Disney/Marvel Studio’s Ant-Man. Combined with $49.2m from North America, Minions ranked as the number one worldwide release on $115.3m. The international tally stands at $410.4m.

Jurassic World crossed $900m internationally following a $12.2m weekend take from 63 territories, overtaking $895.2m set by The Avengers to reach $902.3m and become the sixth biggest international of all time.

It was also due to overtake stablemate Fast & Furious 7’s global tally of $1.512bn on Sunday (July 19) to rank as the fourth biggest worldwide film. The final release is scheduled for Japan on August 5.

UPDATED: Marvel Studios’ Ant-Man opened day-and-date with North America in its first 37 territories to score a confirmed $56m, of which $3m comes from 182 Imax sites. The total rises to $113.2m worldwide factoring in the number one $57.2m North American launch.

Elsewhere the Paul Rudd starrer grossed $4m in France and $3.6m in Taiwan. In a string of estimates the film delivered $2.8m in Malaysia, $2.7m in the Philippines, $2.6m in Thailand and $1.1m in Argentina.

Ant-Man opened top in all its Asia Pacific territories and delivered the biggest launch for a Marvel Cinematic Universe release in  Hong Kong, Indonesia, Malaysia, the Philippines, Singapore, Taiwan and Thailand.

It also ranks number one in Israel, Ukraine, Turkey, Portugal and the Czech Republic.

UPDATED: Terminator: Genisys grossed a confirmed $21.5m from 64 territories to push the running total to $196m. The sci-fi reboot produced a strong number one debut in the UAE on $1.2m from 38 sites for new Terminator franchise and Arnold Schwarzenegger records and scored the studio’s fourth biggest opening weekend.

UPDATED: Spy grossed a confirmed $1.9m from 42 markets to reach $120.3m and arrived in pole position in Italy on $681,442 from 290 screens. UK audiences have generated an estimated $15.4m after seven sessions and and Spain an estimated $2.1m after four, while France has produced a confirmed $4.9m after five.

Paper Towns added $3.4m from five for a promising early $6.7m. The mystery-romance from The Fault In Our Stars author and YouTube video blogger John Green opened at number three in Australia on $1.5m from 225 and has grossed $4.5m in Brazil after two sessions. It is scheduled to open in North America this week via Fox.