Night At The Museum 3 rules international box office on $45.9m

JANUARY 11 UPDATE: Fresh from its record-setting $5.5bn global box office haul, Fox continued to demonstrate its international potency as Night At The Museum: Secret Of The Tomb ruled the roost, Penguins Of Madagascar crossed $200m and Taken 3 scored a $10.5m number one UK debut. 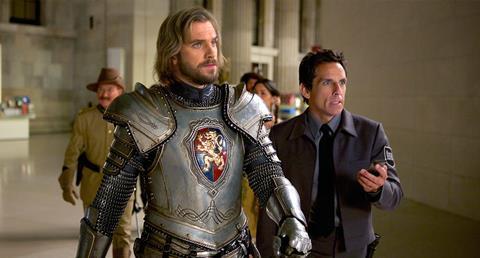 UPDATE:Night At The Museum: Secret Of The Tomb grossed $45.9m from 66 markets powered by $26.7m from 3,887 screens in China, where the film ranks number one and has been in release for eight days. The overall international running total has climbed to $148.4m.

Taken 3 added $3.2m from 534 in South Korea for $12.8m and rank second after two weekends. Russia, Spain and Holland lie in wait this week.

Dreamworks Animation’s Penguins Of Madagascar crossed $200m as $9.7m from 50 markets elevated the haul to $209.4m. The film opened through a non-Fox distributor in South Korea in third place on $2.4m from 524 and added $2.1m in Australia in the second session for $7.6m.

Mexico has generated $18.4m after four sessions, France $14.9m after four, Germany $13.9m after seven and the UK $11.7m after six. The Penguins arrive in Brazil this week.

UPDATE: The Hobbit: The Battle Of The Five Armies surged to $545.1m internationally on the back of a $21.1m weekend.

American Sniper continued its storming run in Italy as $4.4m from 492 saw it climb to number one and reach a mind-boggling $14.8m for an all-time Clint Eastwood record after 10 days in release. It opens this week in the UK.

The family release grossed $12.6m from 54 territories in its 12th weekend to reach $194.5m. Japan remains the lead market and stayed top for the second consecutive weekend to reach $44.4m after four to become second only to Frozen in the Disney Animation pantheon.

Into The Woods grossed $7.6m from 15 territories over the weekend to climb to an early $15.3m. The musical opened on $3.8m in second place in the UK and also arrived in at number two in Australia on $3m. The film has generated $2.4m n South Korea and $1.6m in Russia. January debuts include Spain on January 23, France on January 28 and Brazil on January 29.

UPDATE: Legendary’s Seventh Son, which Universal is distributing worldwide, added a confirmed $8m from 34 territories as the tally climbed to $35.8m. The action film opened top in the Philippines, Bulgaria, the UAE and other Middle Eastern markets.

The film finished its first week in Russia as the top film and has generated $15m in 11 days. There are 28 territories to go in the coming months including Argentina, Ecuador, Mexico, Panama and Uruguay next weekend.

There are 39 territories to open. This week brings debuts in Australia, Brazil, Germany and Russia.

The Theory Of Everything grossed $4.9m from 12 territories to reach $20.1m and consolidated last weekend’s UK debut with a $3.7m follow-up from 542 that elevated the running total to $12.1m.

The Stephen Hawking drama scored a $259,000 limited debut in Mexico in 50 theatres. Italy and Spain lie in wait this week.

Dumb And Dumber To, which Universal is distributing in seven territories, grossed $2.6m for $20.8m. The comedy arrived in Australia on $2.1m from 208 for a Farrelly Brothers record. Australia and New Zealand were the final territories.

Fury brought in $4.2m to boost the tally to $115.6m, of which $70,7m comes via Sony markets and the $44.9m balance from the war film’s financier and international sales agent QED International.

Spain led the weekend’s three debuts with a $1.8m number one launch on 385 screens, while Venezuela delivered $300,000 on 25 for number five in the market.

Annie grossed $1.4m from 19 territories for $19.4m and has amassed $14.8m through Sony and $4.6m via Village Roadshow. The musical debuted in China on Friday on more than 6,000 screens although results were not available at time of writing.

The UK has produced $9.9m after three weekends. Annie is scheduled to open in Germany this week followed by Mexico on January 23, Japan on January 24 and Spain on January 30.

The Gambler took $583,000 from seven territories as the early running total climbed to $955,000. It opened in Mexico on $509,000 from 234 venues and will debut in Germany this week, followed by Russia and the UK on January 22 and 23 respectively and Australia on February 5.