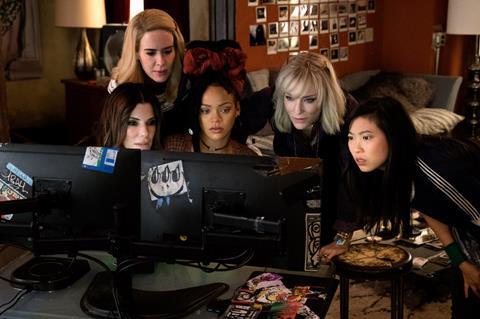 JUNE 11 UPDATE: Warner Bros’ Ocean’s 8 featuring a female ensemble led by Sandra Bullock and Cate Blanchett ruled North America on a solid $41.6m – the highest number in the 17-year-old rebooted franchise although the lowest when adjusted for inflation.

Global Road’s Hotel Artemis flopped in eighth place on $3.2m from 2,407 venues. Jodie Foster plays a nurse who runs a hospital for criminals.

Lucasfilm’s Solo: A Star Wars Story dropped to second place following a 46.4% drop in the third session, adding $15.7m for a lacklustre $176.7m. The fairest comparison is the only other franchise spin-off to date – Rogue One: A Star Wars Story, which reached $532.1m in December 2016 and stood at $318.1m by the same stage.

Focus Features opened Morgan Neville’s documentary Won’t You Be My Neighbor? about US TV personality Fred Rogers at number on 19 on $419 from 29 sites, while Gunpodwer & Sky opened Sundance favourite Hearts Beat Loud at number 37 on $74,524 in four venues.