UPDATED SEPTEMBER 21: Maze Runner: Scorch Trials was active in 66 markets over the weekend as the early running total climbed to $78m and counting. 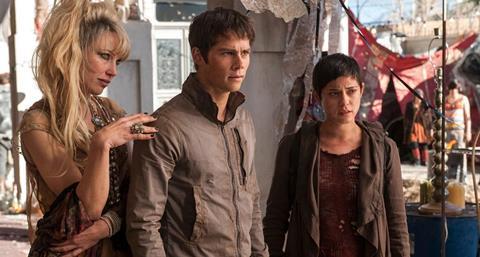 UPDATED: The YA sequel opened in 30 markets day-and-date with the number one North American launch led by $7.2m from 804 in South Korea for the biggest Fox opening in the market so far this year.

UPDATED: As the studio became the first to cross $4bn at the international box office, Everest launched in 36 territories day-and-date with the North American debut and grossed $28.9m.

Roughly $3m of the international weekend came from 172 Imax screens, feeding into a $9m global session that overtook $5.9m from Resident Evil: Retribution to set a new September opening record

Everest opened in second place in Germany on $2.9m and in Spain on $1.6m. Kormakur will doubtless be celebrating the biggest release of the year-to-date in Iceland on $144,000 from 11 venues.

This week the film arrives in 22 territories including Brazil, France, Italy, South Korea and Russia.

Universal and Illumination Entertainment’s Minions added $23.5m from 55 as the tally soared to $785.9m internationally and $1.118bn worldwide. The film ranks number one in China where $19.5m boosted the eight-day total to $50m.

Straight Outta Compton grossed $3.7m from 20 for  $30.1m and debuted top in France on $1.3m. The NWA biopic has crossed A$10m in Australia, crossing the local blockbuster threshold.

UPDATED: Mission Impossible: Rogue Nation generated $21.2m from 53 territories to reach $464.7m after adding $18.2m in its second weekend in China for an eye-popping $120m. France has produced $20.4m after six sessions.

UPDATED: Following festival presentations in Venice, Toronto and Telluride and upcoming trips to San Sebastian and London, Black Mass is at the centre of a staggered roll-out.

The crime drama launched in a few smaller markets in Asia and Central America at the weekend and took $655,000 from five.