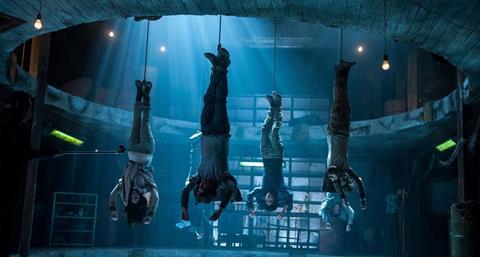 Baltasar Kormakur’s Venice Film Festival opener Everest arrived at number five via Universal on an impressive $7.6m given the 545 theatre count and will expand in the weeks to come. Most of the gross came from Imax as the action thriller delivered $6m from 366 North American Imax screens, beating the $3.1m September record set by The Equalizer in 2014.

Two low-budget films from the Sony fold continued to prosper as last weekend’s number one release The Perfect Guy – with a stated production budget of $12m – dropped to number four and reached $41.4m after two sessions through Screen Gems.

War Room, which closed out the summer season as the top film two weeks ago via TriStar and reportedly cost $3m to make, ranks sixth and stands at $49.1m after four weekends.

A Walk In The Woods ranks seventh through Broad Green on a decent $24.3m after three weekends.

Overall box office for the top 12 reached $98.8m and climbed 16.1% against last weekend and gained 6.7% against the $92.2m comparable session in 2014, when The Maze Runner opened top and A Walk Among The Tombstones arrived in second place.