NOVEMBER 16 UPDATE: Sony, MGM and EON Production’s 007 thriller ruled the world for the second weekend, powered by a titanic international session that broke records in China and generated $153.3m overall. 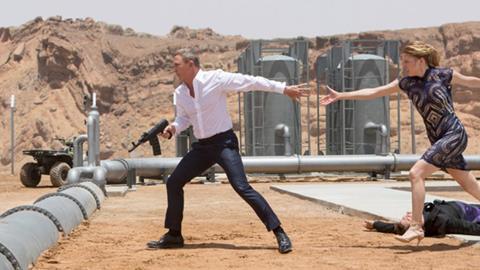 In the wake of the Paris attacks on Friday that left 129 dead, the Gaumont-Pathe chain was likely to remain closed until Monday while MK2, Les Ecrans de Paris and UGC reopened most of their Parisian theatres on Sunday.

UPDATED: After grossing $142.3m over the weekend through Sony and $11m via MGM markets, Spectre has amassed $413.8m internationally and $542.8m worldwide. A running total of $357.9m comes from Sony markets and the $55.9m balance via MGM licensees. The film ranks number one in 63 of its 69 active markets.

James Bond was in bullish form in 14 new markets, setting one of several records in China for the Friday-Sunday debut of a 2D US film on $48.1m from 14,700 screens that is days away from crossing Skyfall’s $m final gross.

France generated $15m while two results that included previews were roughly on par with Skyfall: Australia delivered $8.5m from 610 screens and South Korea $8.1m from 1,100.

The film added $13m worldwide via Imax and stands at the cusp of $40m. It set a new three-day November opening record in China on $4.6m from 246 screens and took $9m from 483 international screens.

The film achieved a similar feat in the UK where it grossed $1.4m. It took $30.1m overall from seven markets.

The Martian grossed $5.8m from 63 for $270.9m and heads to China on November 25, an intriguing prospect given the heroic collaboration in the storyline between NASA and its Chinese counterpart.

The Peanuts Movie is still in its early days and added $2.3m from 14 markets for $7.9m, with the bulk of markets to follow over the year-end holidays.

DreamWorks’ Bridge Of Spies took $1.3m from 24 markets for an $19.3m running total. The remaining markets will open mostly in early December.

Paranormal Activity: The Ghost Dimension grossed $3.2m from 47 markets to reach $56m, while Scouts Guide To The Zombie Apocalypse added $3.2m from 32 for $6.1m.

UPDATED: Steve Jobs kicked off its international release in 14 territories including Germany and the UK to record $2.8m. The biopic opened at number five in the UK on $1.3m and arrived in seventh place in Germany on $598,000.