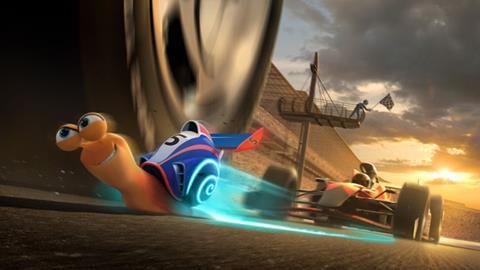 After the lowest-grossing weekend last week, the UK box office kicked back into gear this week with Turbo speeding to the top spot, thanks to its previews last week.

Officially charting second but winning the Fri-Sun weekend with $4.9m (£3m), LFF opener Captain Phillips is off to an excellent start in the UK.

In terms of Greengrass’ directorial outings, Captain Phillips is his second biggest behind The Bourne Ultimatum’s $10.6m (£6.6m) debut, including $2m (£1.24m) in previews.

With strong word-of-mouth and an older-skewing audience, Captain Phillips is also likely to post healthy midweek numbers and enjoy a fruitful run.

The UK’s reigning champion for the past three weeks, Prisoners might have fallen from first but has crossed the £6m mark in its fourth week.

Jon S. Baird’s adaptation of Irvine Welsh’s novel has now amassed $5.3m (£3.28m) in the UK, a more than healthy return for a tricky, adult-orientated sell.

That’s behind the debut of director Hirokazu Kore-eda’s last UK outing, I Wish, which opened with $33,000 (£20,463) from seven sites earlier this year.

In one of the busiest release windows this year, this week sees saturation releases for Paramount’s Jackass Presents: Bad Grandpa (opens Oct 23), Sony’s Cloudy with a Chance of Meatballs 2, eOne’s Ender’s Game, Universal’s Closed Circuit and Entertainment’s One Chance.

Artificial Eye’s The Selfish Giant and Empire’s The Reef 2: High Tide both receive wide releases, while Arrow’s The Taste of Money and Dogwoof’s Muscle Shoals are among the films receiving a limited release.