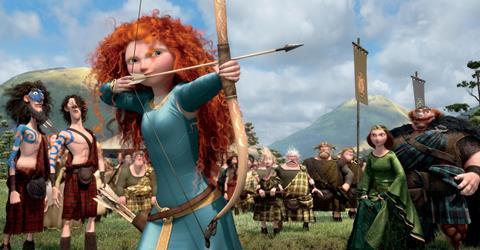 A $3.7m (£2.4m) tally was enough to see Brave retain top spot for a second consecutive week at the UK box office.

With the arrival of four saturation releases this week - including Sony’s Total Recall - it faces a tough task to retain its crown for a third straight week, but should still hold well without any direct competition in the market.

Showcasing remarkable resilience, Ted jumped back up one spot to second.

Universal’s comedy took a further $2.7m (£1.7m) from its 502 sites, and has now laughed its way to an excellent $40.1m (£25.6m) after four weeks in play. That puts it as the year’s fifth biggest film, ahead of the likes of Prometheus and The Hunger Games, and ahead of Borat in the all-time list of adult comedies at the UK box office.

Narrowly behind in third was another Universal title in the form of The Bourne Legacy.

Christopher Nolan’s Batman trilogy is going out on a high at the UK box office as The Dark Knight Rises became the biggest film of the year and the biggest superhero film ever in the UK.

The week’s highest new entry belonged to Lionsgate’s Keith Lemon: The Film, which opened with $1.9m (£1.2m) from its 420 sites in fifth.