Cannes Film Festival envokes classic Hollywood with an image of the late star. 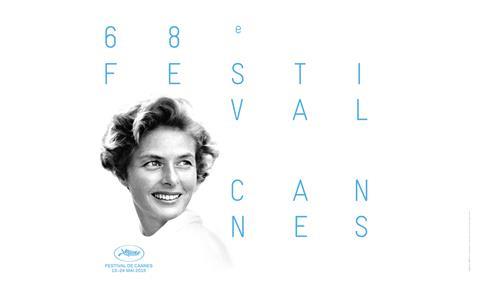 The 68th Cannes Film Festival (May 13-24) has chosen to pay tribute to Ingrid Bergman with this year’s poster, following on from Marcello Mastroianni in 2014.

The star of films including Casablanca, Notorious and Spellbound, Bergman was President of the Cannes Film Festival jury in 1973. She died in 1982, aged 67.

Her daughter, actress Isabella Rossellini, said of the poster: “My family and I are deeply moved that the Festival de Cannes has chosen to feature our magnificent mother on the official poster to mark the centenary of her birth.

“Her outstanding career covered so many countries, from the smallest European independent films to the greatest Hollywood productions. Mum adored working as an actress: for her acting was not a profession but vocation. As she put it, ‘I didn’t choose acting, acting chose me.’ ”

Based on a photograph by David Seymour, co-founder of Magnum Agency, Hervé Chigioni, who also created last year’s festival poster, was again behind this year’s image, with his graphic designer Gilles Frappier.

He has also produced an animated film based on the visual, featuring a remix of the Festival’s theme music, “The Carnival of the Animals” by Camille Saint-Saëns, arranged by two Swedish musicians, Patrik Andersson and Andreas Söderström.

And the tributes will not end there. Ingrid Bergman, in Her Own Words‏, a documentary by Stig Björkman (the author of books and documentaries on Woody Allen and Ingmar Bergman) will also be screened as part of the Cannes Classics.

In addition, Cannes will be associated with the ‘Ingrid Bergman Tribute’ to be organised next September by Isabella Rossellini, to celebrate the centenary of her mother’s birth.

The show, directed by Guido Torlonia and Ludovica Damiani, will be based on the star’s autobiography and her correspondence with Roberto Rossellini.

It will be performed in the five key cities in Ingrid Bergman’s life: Stockholm, Rome, Paris, London and New York, and will feature, alongside Isabella Rossellini, Jeremy Irons, Fanny Ardant, Christian De Sica and several other actors. The show’s cast will be announced at the next festival.