EXCLUSIVE: Goalpost will kick off sales on third instalment in popular franchise. 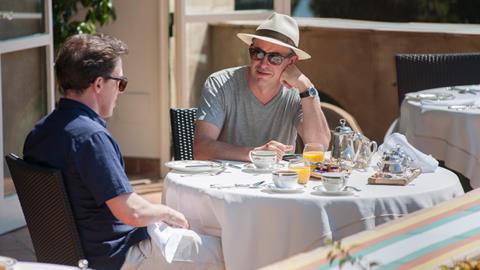 Goalpost Film is to kick off sales in Cannes on The Trip To Spain, the third instalment in the popular comedy franchise from director Michael Winterbottom.

Steve Coogan and Rob Brydon play semi-fictionalised versions of themselves in the improvised comedy which will shoot later this year, taking in restaurants, gentle bickering and impersonations in Cantabria, the Basque region, Aragon, Rioja, Castile-La Mancha and Andalusia.

Sky will broadcast the series in the UK but Goalpost will package the third instalment as a feature, as it has the previous two series.

The Trip To Italy [pictured] pre-sold in Cannes three years ago to IFC for the US, Madman for Australia/New Zealand, Non-Stop Entertainment for Scandinavia and Wild Bunch for Benelux, among others.

Goalpost will also be selling Kevin Costner classic Dances With Wolves, for which it has cleared a number of international rights for the first time since it debuted 25 years ago.