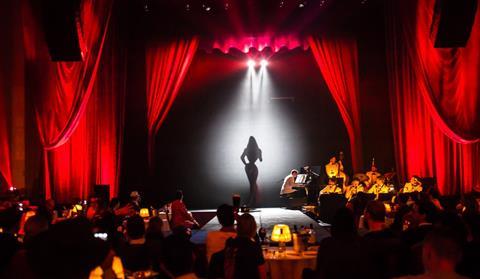 “Watch your step, four eyes,” growled the cartoon gorilla, as Screen walked through the dimly-lit doorway into the Ink & Paint Club on Saturday night.

It marked a step out of the real world and into the animated, immersive realm of Future Cinema.

Once inside the impressive venue, guests sat at one of the many tables that replaced the usual cinema seating and were treated to a series of musical acts, all appropriate to its 1940s setting.

All the while, “weasels” scoured the audience “looking for a rabbit”. Screen was targeted more than once by a strait jacket-wearing weasel that sniffed us all over before breaking into fits of manic laughter.

The bars served character cocktails including the Baby Herman (served in a baby’s bottle); a red concoction titled The Jessica Rabbit; and a Bunny Boiler, featuring the bourbon that sets off Roger in the movie.

Eddie Valiant, played by Bob Hoskins in the film, was seen wandering around with his ill-fated, private detective partner and a wild-haired character in Roger Rabbit’s familiar red, white and blue came cowering by our table seeking refuge before hopping off when the sinister Judge Doom came looking

The star turn was Jessica Rabbit, who brought to life the impossibly curvaceous femme fatale of the feature, gliding her way through the assembled viewers.

After a raucous chase around the ‘club’, Jessica and Roger were reunited and the film began.

As with previous productions, the screening was enhanced by the cast. Roger smashed plates over his head while stood the bar; a drunken Valiant skulked morosely through the crowd; and Jessica took another tour of the tables.

It didn’t quite match the surprise of seeing an enormous Stay Puft Marshmallow Man, which inflated near the end of Future Cinema’s Ghostbusters screenings in December, and where was Benny the Cab? Surely a missed opportunity there, as the talking taxi draw the biggest cheer of the night on screen.

But as the cast took to the stage at the end of the night to kick off the party, pulling audience members onto the dance floor, the guests on Screen’s table were convinced it was the best night they’d had in a long time and would definitely toon in for the next event.

Here’s hoping they’ll embrace another of Zemeckis’ 80s classics. The campaign for Back to the Future starts here!

Future Cinema will stage Who Framed Roger Rabbit until Feb 23.  More information can be found at www.futurecinema.co.uk/tickets