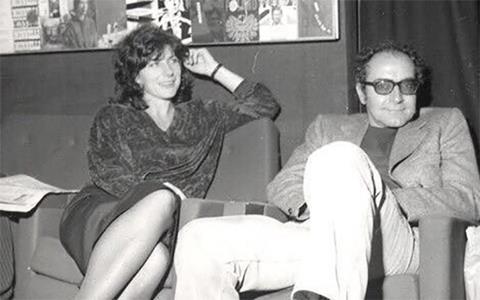 A huge figure in the UK’s independent film business, Engel’s death has sparked messages of praise across the distribution and exhibition sectors.

Born Pamela Balfry in 1934, the UK executive started out in the late 1950s as a secretary for then Sight and Sound editor Penelope Houston.

She would go on to work as an assistant to Richard Roud at the London and New York Film Festivals before joining Derek Hill’s art-house venue Essential Cinema in the late 1960s.

Balfry and first husband Andi Engel established distributor Artificial Eye in 1976, thus “beginning an odyssey of distribution and exhibition unlikely ever to be surpassed,” in the words of former London Film Festival director Sheila Whitaker.

Despite separating from Andi shortly after Artificial Eye was founded, the duo remained business partners and Pamela served as the company’s first managing director.

Over a 30-year period, the duo and its dedicated staff - including Engel’s second husband Robert Beeson, who also worked at the company for 30 years and became its long-term MD - revolutionised the UK cinema landscape by pioneering the works of directors including Krzysztof Kieslowski, Eric Rohmer, Andrei Tarkovsky, Alain Resnais, Robert Bresson, Bela Tarr, Marguerite Duras, Ousmane Sembene and Abderrahmane Sissako.

Other filmmakers whose work the company picked up include Olivier Assayas, Nuri Bilge Ceylan, Arnaud Desplechin, Cedric Kahn, Robert Guediguian and Patrice Chéreau, with Kevin Smith’s Clerks (1994) and Todd Solondz’s Welcome to the Dollhouse (1995) also in the mix.

Aside from the scores of festival winners, notable box office successes included The Taviani Brothers’ Padre Padrone (1977), Werner Herzog’s Fitzcarraldo (1982), Chen Kaige’s Farewell My Concubine (1993) - the ‘first big Chinese film in Britain’ - Paolo Sorrentino’s The Consequences of Love (2004), Jacques Audiard’s The Beat That My Heart Skipped (2005), and Michael Haneke’s Hidden, which took more than £1.5m at the box office.

The company’s biggest theatrical success was Jean-Paul Rappeneau’s Cyrano de Bergerac (1990), which netted £2.5m, making it the most successful foreign-language film ever in the UK at the time and still among the best-ever performers.

As a distributor and programmer, Engel also championed the work of British filmmakers such as Ken Loach and Anthony Minghella, picking up the former’s Palme d’Or contender Land And Freedom in 1995.

Philip Knatchbull, CEO of Curzon said: “I’m very sad to hear the news about Pam, it really feels as though part of the British film industry dies with her. Pam had such incredible passion and knowledge and what she achieved with Andi Engel and Robert Beeson at Artificial Eye, and more recently at New Wave, made an immeasurable contribution to cinema in the UK. She will be much missed by all of us at Curzon Artificial Eye.”

Clare Binns, director of programming and acquisitions for Picturehouse Cinemas and Picturehouse Entertainment commented: “Pam was passionate about film and fought for her films and cinemas with the same passion. It was not just about the money for her, she believed in cinema and if she bought a film it was because she loved it and wanted it seen so others could share the pleasure of cinema that she did.”

“She was a huge character in a world now filled with grey business people all analysing everything to the last percentage point. I will miss her striking views and belief in film however it does at the box office.”

BFI Film Fund director Ben Roberts‏ said on Twitter: “Remember the 1st time Pam Engel took a booking from me for the Renoir & Chelsea. Many attempts to crack the code. Punched the air! RIP Pam.”

Publicist Charles McDonald added: “This is very sad news. Artificial Eye, perhaps uniquely among distributors (with the exception of Disney) are the one company where you know what you’re going to see when you go to the cinema. She built a genuine brand. She was a steely, determined woman with excellent taste. Her and Andi were trailblazers of international and independent cinema in the UK.”

Engel died in London on Saturday 15 July following a period of illness. She is survived by her husband Robert Beeson.