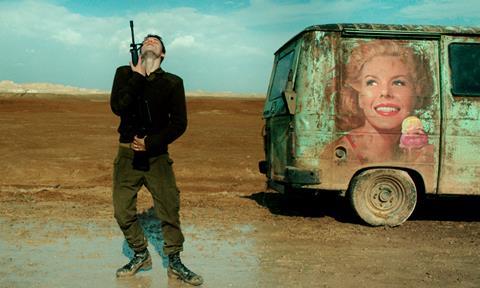 In Foxtrot, Michael and Dafna are devastated when army officials show up at their home to announce the death of their son Jonathan.

While his sedated wife rests, Michael spirals into a whirlwind of anger only to experience one of life’s unfathomable twists which rival the surreal military experiences of his son.

The Israeli title, which has already drawn unannounced buyers, will get its world premiere in competition on the Lido before heading to Toronto for its North American premiere.

Maoz’s hard-hitting war film Lebanon, set during the First Lebanon War in 1982, charts the story of a lone tank and a paratrooper platoon dispatched to search a hostile town.

The Match Factory will also be on the Lido with the world premiere of Lucrecia Martel’s historical drama Zama, about a 17th century Spanish officer stranded in Paraguay who is awaiting his transfer to Buenos Aires, and Venice Days title Looking For Oum Kulthum by Shirin Neshat.

Zama, the Argentine director’s first movie since 2008 Cannes drama The Headless Woman, and Looking For Oum Kulthum - both previously announced as part of the company’s slate - will head to Toronto for The Match Factory alongside Jan Zabeil’s Locarno debut Three Peaks, Fatih Akin’s Cannes competition drama In The Fade and Aki Kaurismaki’s Berlin winner The Other Side Of Hope.

US rights are currently under negotiation for Zabeil’s drama while Magnolia picked up Akin’s In The Fade and Criterion will handle The Other Side Of Hope in US and Films We Like in Canada.