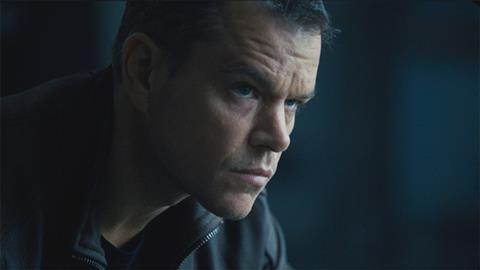 Jason Bourne arrived at number one in North America on a confirmed $59.2m from 4,026 theatres.

The promising debut marks the third collaboration between Damon and Greengrass, who return to the series after The Bourne Ultimatum in August 2007, which remains the highest earner in the five-film set.

Despite mixed reviews, Jason Bourne should have little trouble overtaking the $113.2m final gross of The Bourne Legacy, which starred Jeremy Renner and was directed by Tony Gilroy and opened in August 2012.

Overtaking the final tally of The Bourne Ultimatum’s $227.5m – the highest North American gross in the franchise – will require Bourne-like feats of endurance and strength. Jason Bourne grossed $50.1m from 46 international markets at the weekend.

Ghostbusters also crossed the milestone in its third weekend via Sony and ranks seventh on $10.1m for $106.5m.

Hillary’s America: The Secret History Of The Democratic Party, the documentary by conservative think tank member Dinesh D’Souza, dropped two places to number 11 in its second weekend on $2.5m from 1,066 sites for $8.7m via Quality Flix.

Woody Allen’s Amazon-bound Café Society climbed five places to number 12 after expanding from 50 to 565 sites and added $2.3m for $3.9m in the third session.

The hit Sundance documentary Gleason opened on $91,583 from nine sites via Open Road Films at number 35 and will debut later this year on Amazon Prime Video. The Exchange handles international sales.