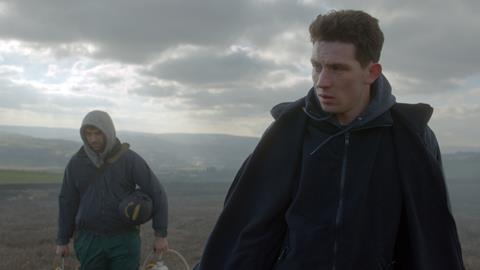 God’s Own Country follows Johnny Saxby, a solitary young sheep farmer who numbs his daily frustrations with binge drinking and casual sex. The arrival of a Romanian migrant worker (Alec Secareanu) ignites an intense relationship that sets the former on a new path.

Finance came from BFI and Creative England using funds from the National Lottery while the movie began its development through the iFeatures programme. Met Film Post and Paul Webster’s PW Pictures completed the financing.

The film was shot on the Yorkshire moors in the north of England, where writer/director Francis Lee grew up. Lee, who originally trained as an actor, has made several acclaimed shorts set in rural locations – including The Farmer’s Wife, Bradford Halifax London and documentary short The Last Smallholder.

Protagonist CEO Mike Goodridge commented: “Francis Lee’s stunning directorial debut set against the wild landscapes of northern England stole our hearts. It’s a beautiful love story marked by Lee’s bold film-making choices and a sense of emotional authenticity and tenderness that we believe will resonate with audiences everywhere. This is very much a universal story of a young man learning how to trust and love.”