There Will Be Subs: How MUBI captured Paul Thomas Anderson’s 'Junun' 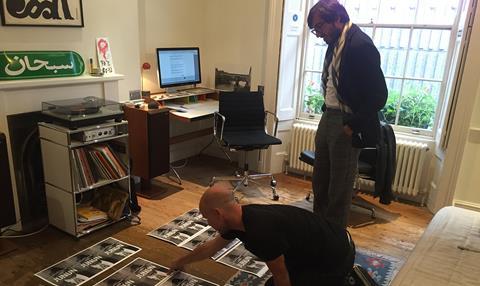 MUBI CEO Efe Cakarel couldn’t believe his eyes when an email dropped into his inbox early this year with the subject line: ‘from Paul Thomas Anderson’.

Six-time Oscar nominee Anderson, one of Cakarel’s favourite directors, had got in touch to compliment the London-based executive on his curated subscription service and to ask if he was free to meet for a chat.

“I literally fell off my chair,” beams an excitable and still incredulous Cakarel. “We had no idea he was a subscriber.”

While the Turkish cinephile and entrepreneur knew the service had some big-name subscribers – the Coen brothers, among them - getting Anderson’s email was a watershed moment.

“It was an incredible moment because Paul Thomas Anderson and the films he makes is the reason MUBI exists. We have so much respect for what he does. And to do it in Hollywood, that is so hard. Haneke is amazing. But try to do that in the studio system. He is a true auteur.”

Cakarel would travel to LA on work some weeks later, during which time he met the There Will Be Blood and The Master director for the first time.

The two got on well. But better was still to come.

During subsequent correspondence, the director revealed to Cakarel a previously unannounced and very much under-the-radar documentary he had shot in India about Radiohead musician Johnny Greenwood: Junun.

Cakarel politely proffered that the indie film service would be happy to carry the film at a later date, not thinking for a minute that he might be able to get it first run.

However, in a surprise move the avowed celluloid junkie Anderson made it known to Cakarel soon after their meeting that he would be happy for his first documentary to debut on the digital only MUBI, following its New York Film Festival world premiere.

Anderson’s CAA representatives cut the deal with MUBI in August. While it is unclear whether other deals were sought for the film they likely were. One rumour is that Netflix offered considerably more for the music documentary.

To Cakarel’s inevitable delight, however, MUBI secured exclusive digital rights for a 30-day period from last Friday, after which time it may be sold to EST services such as i-tunes and SVOD kingpin Netflix. The largely positive reviews may help with an event theatrical push.

Deal points and structure are being kept under wraps but it is clear the outlay for MUBI will be be far higher than anything it has spent before. The marketing campaign alone is close to $1m.

The marketing drive on Junun is five times the cost of the company’s biggest brand push to date earlier this year, and includes a sizeable tube campaign matched by full-page print adverts in outlets including New York Times and Time Out, among others.

The company consulted well-known advertising executives including Richard Flintham, who helped design the posters for the campaign.

“If we’re going to blitz the adverts, this is the time,” says Cakarel. “Exclusive online premieres of Paul Thomas Anderson films don’t happen every day.”

According to Cakarel the campaign was already paying off ahead of its debut last Friday.

“The uptick has been vast. We are adding double the number of subs we would normally see each day across the world”.

While the theatrical prospects were always likely to be limited on the niche documentary, the decision to go with an online platform first (and one other than Netflix or Amazon Prime Instant Video) was unusual considering Anderson’s standing.

However, the decision correlates with a number of industry trends: the growing ties between talent and platforms; the challenges in finding theatrical homes for even well-heeled independent films; and the growing allure of online subscription services.

It also speaks to MUBI’s stamp of approval among indie film aficionados and the growing ambitions of former Goldman Sachs banker and MIT computer science graduate Cakarel (who holds an MBA from Stanford to boot).

The company, formerly known as The Auteurs, is swiftly growing its acquisitions ambitions and operational footprint.

Available in 200 countries, this year the company closed its first studio library deals with Sony and Paramount, and out of Cannes it also picked up its first film for all rights distribution: Miguel Gomes’ Directors’ Fortnight entry Arabian Nights, which it will jointly release in the UK with New Wave next year.

“In Cannes, there were only two online platforms negotiating to buy all rights on official selection films outside of the traditional distributors,” claims Cakarel.

“Netflix was one. We were the other.”

“We talked to two or three distributors about potentially collaborating. We were competing to buy Son Of Saul. We won Arabian Nights.”

MUBI is lining up a second exclusive premiere with another well-known director for 2016 and it is increasingly picking films up earlier in their cycles.

It recently closed deals to screen LFF films Nicola Constantino: The Artefacta from Coccinelle Film Placement and Lucifer from NDM Sales during the festival.

“Next Cannes we’ll be a lot stronger,” says Cakarel. “We’ll be deploying more capital and we’ll see films and scripts much earlier.

“My team was in MIPCOM and they’ll be at AFM and Berlin. But Cannes is really our port.”

After eight years in operation, and three adhering to the current curated model, the financials are improving.

But while revenue may be close to a couple of millions dollars per year, the company, which charges subs around $4.99 per month (£2.99), is yet to see profit. Inspired by the strategy of its super-scale rival Amazon, Cakarel is thinking long-term growth ahead of short-term gain.

With only 100,000 subscribers, size-wise MUBI pales in comparison to Amazon and Netflix, the latter of which has 65 million subs worldwide.

Netflix is spending about $4bn a year on film and television content. MUBI, by contrast, spends just a few million dollars.

Despite that, Cakarel still sees Netflix as the site’s biggest rival.

“When thinking about competitors it’s about asking where the attention of my audience goes. 40% of our subs are Netflix subs. I am one. The TV offering is great. But the film diversity is terrible.”

Unlike Netflix, the cheaper MUBI goes for a less is more approach. The 30 films on its site at any one time are predominantly art-house and it shows no TV, a strategy it won’t be deviating from soon.

“We’ll focus on movies, and will provide the best movie experience globally. That’s how we’ll complement Netflix, which is skewing heavily towards TV. The only way to win against Netflix is to have a clearly differentiated model.”

So despite the studio deals, don’t expect to see Transformers on the site anytime soon.

“If Michael Bay had a film he wanted to show on MUBI? The answer is no. That’s when you start losing the brand. That’s when the Coen brothers and Paul Thomas Anderson leave MUBI. Transformers 4 was a bad film. We say it loud and clear”.

The CEO’s call is being heard by industry suitors.

The company has staff in London, San Francisco, Munich, Mexico City and Istanbul. It is now eyeing an office in China and next wants to grow its footprint in North America, particularly in New York.

For the industry, the Junun deal representes a small but noticeable development in the global digital revolution, but for MUBI, the acquisition is understandably a big deal.

“If it’s a success we’ll share the numbers,” promises Cakarel. “‘This is how many saw it, this is how much revenue we made etc…’ This will make us even more interesting to filmmakers as a platform for releasing their films”.

The company’s ceiling is expanding. Time will tell how far that ceiling can stretch.