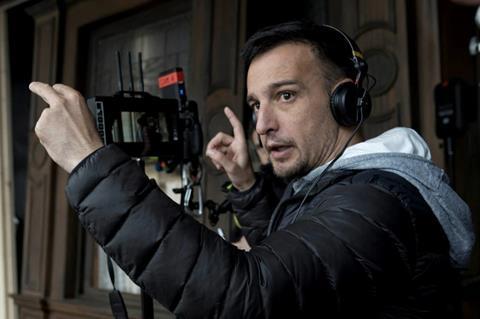 Spanish filmmaker Alejandro Amenábar, whose feature credits include The Others, Agora and While At War, discusses his first TV series, La Fortuna, inspired by the true story of the legal battle between the Spanish government and an American treasure hunter, played by Stanley Tucci, to claim the bounty of a Spanish frigate that sank in 1804.

The miniseries marks the first co-production between Spanish streamer Movistar+ and AMC Networks in the US.

The six-episode series docked in the official selection of the San Sebastian International Film Festival (September 17-25) out of competition, a reminder of the growing impact of streamers in the country’s industry and of major US firms eyeing the local industry and content made in Spain.

Of his first venture with the TV series format, Amenábar said: “At first, I thought of the adaptation as a feature just because it’s what I had done in the past but developing the screenplay we realised it work better as a miniseries which is a format I can handle as a spectator and as a director. The difference, in the end, of making a series is more a matter of quantity than quality: the same personal investment and freedom as in a feature but investing longer hours in the process.

“In terms of creative freedom, I have always been very respectful with the people who put the money in a production, and I’m open to discussions. Working like this I have always managed to end up with the film I wanted and the one I’m proud of signing. That’s why I have never done a “director’s cut”. We cut 20 minutes of Agora after the premiere in Cannes, and I acknowledge that as its director because the film works better this way.”

Of the growing interest of international VoD companies in Spain, Amenábar said: “Streamers have energised the production landscape in Spain. More stories than ever are being made and the demand of fiction is rocket high. The creator of Élite [Carlos Montero], who is a friend of mine, tells me, ‘Why do I have to go to Hollywood when I can work like this at home, in a series that will be seen all over the world’. That is great, exciting.

“The danger? That platforms become streamers of homogenous content, slaves to algorithms. Cultural values are key. That’s why the project of La Fortuna was perfect for me because it allowed me to have a very Spanish angle and homage even the cinema of José Luis García Berlanga in the context of an international production and then go to the Hollywood tradition of courtroom dramas.”

In researching the series, Amenábar explained how he enjoyed being given the chance to approach a more light-hearted story right after the historical Civil War drama of While At War. Again, in his case, it was the graphic novel that interested him in recreating the battle to keep the bounty of the Spanish ship Nuestra Señora de las Mercedes sunk by the British near the Algarve in 1804 and the legal battle that ensued more than a century later between the Spanish government and a US for its bounty.

He confesses the sea is not his element and it took him a while to learn to swim as a child. He also still gets seasick. But none of this stopped him. More a fan of Steven Spielberg’s Jaws and James Cameron’s Titanic than classic pirate films, Amenábar has enjoyed the chance of venturing in new waters.

“I had never tackled the adventure genre before in my career and it felt right to do so with La Fortuna, with touches of epic and romantic cinema. Humour and love are part of my life more than my films would lead you to believe so it was a chance to explore that. It’s also my first adaptation”, says Amenábar. “I was attracted to the idea of exploring two cultures, the American and the Spanish”, after a career that includes international titles such as The Others, with Nicole Kidman, Vanilla Sky with Tom Cruise, Agora with Rachel Weisz and Oscar Isaac and Oscar-winning The Sea Inside, with Javier Bardem.

The cast is led by emerging talent such as Álvaro Mel and Ana Polvorosa alongside a more seasoned cast of Spanish and English-speaking actors such as Stanley Tucci, T’Nia Miller, Clarke Peters, Manolo Solo, Blanca Portillo and Karra Elejalde, who starred in Amenábar’s While At War.

Amenábar confesses the fact that in La Fortuna two characters at opposite sides of the political spectrum (played by Mel and Polvorosa) can work together and fall in love was something that links the series to his previous Spanish Civil war drama: “As a Spanish citizen I felt that While At War was a film I had to make and now I have had the chance to address the topic of mutual understanding from a different angle.

”I have addressed historical events in many of my films, sometimes ancient times like in Agora. Others, more recent, like in While at War and The Sea Inside. Even when I was a student, I loved history. I like looking at the past because it gives you the key to see the future. In La Fortuna, we show the tragedy of the shipwreck and the fact that the loss of these people, their work, is part of our history, of who we are, beyond a fistful of gold.”

AMC Networks executive Kristin Jones, who oversees the group’s search for global commissions, co-productions and acquisitions as the company’s executive vice president of international programming, attended the premiere in San Sebastian and celebrated the opportunity to work with Movistar+.

Talking with Screen, she explained their policy is project driven. Discussions with Movistar+ started two years ago, looking for a story that could appeal to both American and Spanish audiences. The answer came in the shape of a Spanish graphic novel: The Treasure Of The Black Swan, by Paco Roca and Guillermo Corral.The comic was inspired by the legal and political battle to reclaim a valuable treasure buried at sea (about 600,000 gold and silver coins worth millions), after it was located and retrieved by a US company.

AMC saw the international potential of the story and liked the “David and Goliath ring to it”. And things only got better when Domingo Corral, head of original fiction at Movistar+, said Amenábar was keen to board the project. The draw to work with a Spanish company like Movistar+, lies according to Jones, in “the scope of the Spanish-speaking market, the US included, and the technical and storytelling talent in Spain”.

AMC will consider working together again with Movistar+ since they are on the look-out for more large-scale international co-productions, “ideally keeping a 50% English-language content”. “When the right project arises, we’ll work hard to find another story to work on together with Movistar+ because they are really good partners”.