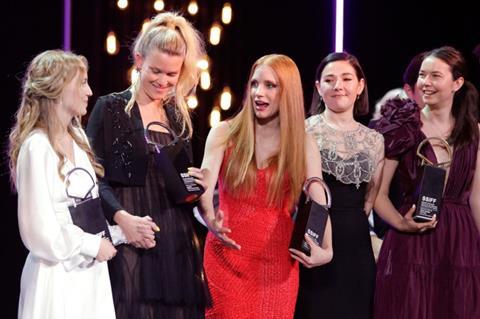 The victory adds another woman director as winner of a festival’s main prize following the Palme d’Or win at Cannes for Julia Ducournau’s Titane and the Venice Golden Lion triumph for Audrey Diwan’s Happening.

Other awards in SSIFF’s main competition included a special jury prize for Earwig, by Lucile Hadzilhalilovic; the Silver Shell for best director for Danish filmmaker Tea Lindeburg for her debut feature, As In Heaven; and the Silver Shell for best leading performance shared by As In Heaven’s teenage lead Flora Ofelia Hofmann Lindahl and Jessica Chastain for The Eyes Of Tammy Faye.

The jury was led by Georgian filmmaker Dea Kulumbegashvili, who herself took the top prize at the Spanish festival last year with her first feature Beginning.

The winning Romanian production is a drama about a dysfunctional family living in a rural mountain region, a toxic environment that the film’s young heroine, played by Iona Chitu, is desperately trying to escape. Grigore’s San Sebastian triumph adds a significant new voice to the vibrant Romanian cinema scene.

The Silver Shell for best supporting performance went to the ensemble cast of Who’s Stopping Us, by Spanish director Jonás Trueba (son of Fernando Trueba) – a film that toys with the boundaries of fiction and documentary. The other high-profile Spanish productions in the main competition – Icíar Bollaín’s Maixabel and Fernando León de Aranoa’s The Good Boss – left empty-handed.

UK writer/director Terence Davies won the best screenplay award for his portrait of English poet Siegfried Sassoon in Benediction, while the best cinematography prize went to Claire Mathon for her work in the French investigative thriller Undercover.

The audience award went to Petite Maman by Céline Sciamma, a delicate portrayal of mother-daughter bonds that was part of the Perlak sidebar – a selection of films that premiered at other international festivals, in Sciamma’s case the Berlinale. The audience award for best European film was also for a French film: Between Two Worlds, directed by Emmanuel Carrère and starring Juliette Binoche, which premiered at Directors’ Fortnight in Cannes.

The Kutxabank-New Directors award for best first or second feature, which comes with 50,000 euros to share between the director and the company that distributes the film in Spain, went to Unwanted, a Russian production directed by Lena Lanskih. Special mention was given to Argentina-Dominican Republic co-production Carajita, directed by Silvina Schnicer and Ulises Porra.

The closing film at a ceremony, still marked by the use of mandatory mask wearing and social distancing in the seating arrangements, was The Laws Of The Border by Spanish director Daniel Monzón.

All eyes are now on SSIFF’s 70th anniversary edition next year.