Screen selects some of the most exciting projects to appear on the Croisette this year. 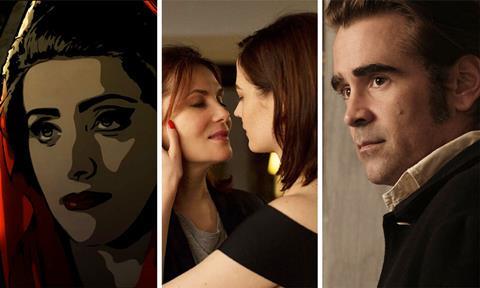 On the eve of the 70th Cannes Film Festival (May 18-27), Screen has selected a few of the stand-out titles from the Competition, Out of Competition, Un Certain Regard, Special Screenings, Directors’ Fortnight and Critic’s Week sections.

Sure to be one of the Croisette’s hottest tickets, Haneke’s 12th big-screen project brings together Isabelle Huppert, Jean-Louis Trintignant, Mathieu Kassovitz and Toby Jones with newcomers Fantine Harduin, Franz Rogowski and Laura Verlinden in an exploration of what it means to be oblivious to the suffering of others. Featuring a bourgeois French family living in Calais and set against the backdrop of the refugee crisis, Happy End — likely an ironic title — is produced by France’s Les Films du Losange, Germany’s X Filme Creative Pool and Austria’s Wega Film. Sony Pictures Classics has US rights. If Haneke wins the Palme d’Or, it will be for a record-breaking third time.
Contact: Bérénice Vincent, Les Films du Losange b.vincent@filmsdulosange.fr

For the prolific Ozon’s 17th feature in 19 years, he reunites with two of his go-to actors, Marine Vacth (Young And Beautiful) and Jérémie Renier (Criminal Lovers, Potiche), who star in an erotically charged tale of a fragile young woman who moves in with her therapist, only to find he is not what he seems. Riding high on the success of the director’s First World War drama Frantz, regular Ozon backers Eric and Nicolas Altmayer of Mandarin Films take production credits, with Belgian outfit Scope Pictures co-producing and Mars handling French distribution. In the past, Ozon has spread his favours fairly evenly across the big three Eurofests, and had more awards kudos in Berlin and Venice. Could this, his third Palme d’Or contender, break his Cannes prize drought?
Contact: Films Distribution info@filmsdistribution.com

Cannes was always likely to find a Competition berth for Ostlund’s latest after its faux pas of 2014, when the widely feted Force Majeure was relegated to Un Certain Regard. With Magnolia Pictures snaring The Square for US distribution back in September, the only issue was whether this Swedish, Danish and English-language drama, set in the art world, would be ready in time (its last-minute inclusion suggests the answer is ‘just’). The story centres on a museum director (Claes Bang) who is about to unveil a show featuring an artist (Dominic West) whose latest installation makes the news thanks to the shock tactics of a PR company. Elisabeth Moss also stars.
Contact: Olimpia Pont Cháfer, The Coproduction Office olimpia@coproductionoffice.eu

The Killing Of A Sacred Deer
Dir: Yorgos Lanthimos

Greek writer-director Lanthimos returns to Competition in Cannes two years after The Lobster bowed to an enthusiastic reception and won the festival’s jury prize. Colin Farrell stars opposite Nicole Kidman in a dark tale inspired by a Euripides tragedy. Co-written by regular Lanthimos collaborator Efthymis Filippou, the narrative follows a teenage boy who tries to integrate a charismatic surgeon into his broken family. The film is produced by Element Pictures, the Irish production house behind The Lobster and the Oscar-winning Room.
Contact: HanWay Films info@hanwayfilms.com

Coppola arrives with her fourth film to play in Cannes and second in Competition, a Civil War potboiler about a wounded Union soldier who stirs up sexual tension at the all-girl’s school in Virginia where he takes shelter. Coppola stalwart Kirsten Dunst stars alongside Nicole Kidman, Elle Fanning and Colin Farrell in this second big-screen adaptation of Thomas Cullinan’s Southern Gothic novel, originally titled The Painted Devil (Don Siegel directed the 1971 version starring Clint Eastwood). Coppola was previously in Cannes with Un Certain Regard entry The Bling Ring in 2013, Competition selection Marie Antoinette in 2006 and her feature debut The Virgin Suicides in Directors’ Fortnight in 1999.
North America contact: Focus Features International contact Universal Pictures International

Joaquin Phoenix leads this thriller about a war veteran’s attempt to save a young girl from a sex-trafficking ring. Director Ramsay is something of a Cannes darling, having premiered all four of her features to date at the festival including, most recently, We Need To Talk About Kevin in 2011. The UK’s BFI and Film4 supported development of the project, which was produced by Why Not Productions and co-producer Page 114 (the company behind Jacques Audiard’s Palme d’Or winner Dheepan). Amazon nabbed US rights at last year’s Cannes after a frenzied bidding war that made it one of the market’s hottest titles.
Contact: Insiders sales@insiders-films.com, Samantha Deshon, Insiders MadRiver samanthad@madriverpics.com

The third feature from rising director Ben Hania is a sharp critique of post-revolutionary Tunisian society. Based on a true story, the thriller is composed of just nine shots and stars Mariam Alferjani as a woman who fights for justice after being raped by police officers. Beauty And The Dogs is Ben Hania’s fiction-feature debut following her award-winning mockumentary Challat Of Tunis and the documentary Zaineb Hates The Snow. The film is produced by Nadim Cheikhrouha for France’s Tanit Films and Habib Attia for Cinetelefilms, with backing from Doha Film Institute and the Berlinale’s World Cinema Fund, among others. Alferjani is one of Screen International’s inaugural Arab Stars of Tomorrow.
Contact: Jour2Fete sales@jour2fete.com

Closeness is the debut film by Russia’s Balagov, who was a student on Aleksandr Sokurov’s celebrated filmmaking course at the Kabardino-Balkarian State University in the city of Nalchik, in the North Caucasus. Set in the late 1990s, also in Nalchik, Closeness tells the story of the kidnapping of a young couple in a close-knit Jewish community. The film explores how far their families are prepared to go to raise the money to save them, as going to the police is not an option.
Contact: Wild Bunch sales@wildbunch.eu

Elizabeth Olsen and Jeremy Renner star in Sheridan’s feature directorial debut about an inexperienced FBI investigator who teams up with a Wyoming game tracker to solve a murder on a Native American reservation. Sheridan scripted the Denis Villeneuve-directed Sicario, which premiered in Competition in 2015, and is riding high on last year’s breakout commercial and critical success for David Mackenzie’s Hell Or High Water, which he also wrote. Production companies include Thunder Road, Acacia Entertainment and Film 44.
Contact: Voltage Pictures sales@voltagepictures.com, Samantha Deshon, Insiders MadRiver samanthad@madriverpics.com

Based On A True Story

The 83-year-old Polanski may be persona non grata in the US, but that won’t stop his new thriller touring in his stead: Sony Pictures Classics, which picked it up back in February, will partner with RatPac on the distribution of a film that SPC must be hoping will outdo Carnage’s modest 2011 US box-office haul. Produced by Wassim Béji’s WY Productions and co-scripted by the director with Olivier Assayas, the film is an adaptation of Delphine de Vigan’s novel about a writer (played by Polanski’s wife Emmanuelle Seigner) pursued by an obsessed fan (Eva Green).
Contact: Lionsgate internationalsales@lionsgate.com

Veteran French filmmaker Téchiné has been a Cannes stalwart in a career that stretches back nearly five decades. He appeared in the first ever Directors’ Fortnight line-up with his 1969 feature debut, Paulina Is Leaving. Since then, he has screened twice more in Directors’ Fortnight, twice in Un Certain Regard, and six times in Competition, scoring the best director prize in 1985 for Rendez-vous. Golden Years, his 22nd feature, is set around the First World War and follows a deserter who disguises himself as a woman with the help of his wife. The film stars Stranger By The Lake’s Pierre Deladonchamps and Rust And Bone’s Céline Sallette, and is produced by ARP Sélection in France.
Contact: Celluloid Dreams info@celluloid-dreams.com

Directed by Whatcha Wearin’? helmer Byun, The Merciless stars Seol Gyeong-gu (Lucid Dream, Cold Eyes) as a gangster — gunning for the top spot in his criminal organisation — who partners up with a newbie (played by Yim Si-wan) while in prison. This is the first action film for Yim, a member of South Korean boyband ZE:A, who also featured in 2013 local hit The Attorney. The film was financed and developed by CJ Entertainment, which co-produced with Pollux-Barunson Co.
Contact: Eunji Kim, CJ Entertainment eunji.kim3@cj.net

The Villainess stars Kim Ok-vin and Shin Ha-kyun — who both appeared in Park Chan-wook’s 2009 Cannes title Thirst — with Bang Sung-jun. Kim stars as a mysterious woman who was raised as a killer, wreaking vengeance on the men who murdered her husband and is recruited to be a secret agent. Backed by Next Entertainment World (NEW), which also had Train To Busan in Midnight Screenings last year, the film is produced by Apeitda.
Contact: Contents Panda sales@its-new.co.kr

In a change-up from his previous feature, the microbudget, iPhone-shot Tangerine, Baker’s latest is filmed on traditional 35mm. The story centres on a six-year-old girl and her carefree, adventure-filled existence with a group of friends, while the adults around them struggle through hard times. Willem Dafoe, Caleb Landry Jones, Brooklynn Prince and Bria Vinaite headline the cast; The Florida Project marks Baker’s Cannes debut.
Contact: Protagonist Pictures info@protagonistpictures.com

I Am Not A Witch
Dir: Rungano Nyoni

The debut feature from Welsh-Zambian writer-director Nyoni, who was Bafta-nominated for her 2011 short Mwansa The Great, is a satire set in present-day Africa. The story explores belief in witchcraft through the experiences of nine-year-old Shula (Maggie Mulubwa), who is sent to a witch camp after being accused of having supernatural powers. The film is financed by BFI, Film4, Film Agency Wales, France’s CNC, the Berlinale’s World Cinema Fund and HBF+Europe.
Contact: Grégoire Melin, Kinology gmelin@kinology.eu

Jeannette: The Childhood Of Joan Of Arc
Dir: Bruno Dumont

This is Dumont’s second time in Directors’ Fortnight. His debut, The Life Of Jesus, played in the section in 1997, winning him a Camera d’Or special mention. Since then, the Cannes habitué has been in Competition three times, with 1999’s Humanité, 2006’s Flanders and last year’s Slack Bay (the first two won the Jury Grand Prix), and in Un Certain Regard in 2011 with Hors Satan. For his latest, a musical, Dumont has worked with electro-pop composer Igorrr and choreographer Philippe Decouflé to explore the childhood of iconic French historical figure Joan of Arc. Jeannette is produced by 3B Productions and Arte.
Contact Luxbox festivals@luxboxfilms.com

Having co-written the screenplay for Thomas Gilou’s Locarno Golden Leopard winning Rai (1995), Kronlund makes her feature debut with this documentary profile of Salim Shaheen, a prolific and popular Afghan actor-director-producer who has made more than 100 films in the past 30 years in his wartorn country. The film received funding from the Ile-de-France region’s Support Fund for Film and Audiovisual Technical Industries, and is produced by Gloria Films Production and Made in Germany Filmproduktion. Pyramide will distribute in France as well as handle international sales.
Contact: Pyramide International sales@pyramidefilms.com

In his debut feature, Soozandeh explores Tehran and examines how moral and sexual freedom are pitted against strict religious law. The animated feature follows the lives of three women and a young musician as their paths cross in the Iranian metropolis. Tehran Taboo is produced by Germany’s Little Dream Entertainment and Austria’s coop99, with co-production from ZDF, ARTE and ORF.
Contact: Celluloid Dreams info@celluloid-dreams.com

Grassadonia and Piazza, who won the Critics’ Week Grand Prix in 2013 with Salvo, return to Cannes with Sicilian Ghost Story, which opens Critics’ Week. The film follows teenager Luna as she strives to break the mafia code of omerta to find her missing classmate Giuseppe. Behind the feature is Indigo Film, the Italian production outfit that boasts credits including Paolo Sorrentino’s Youth and The Great Beauty. Also producing are Cristaldi Pics and Rai Cinema, with Mact Productions and Ventura Film.
Contact: The Match Factory info@matchfactory.de