Ahead of the summer rollout of Nicolas Winding Refn’s The Neon Demon, Cliff Martinez spoke to Screen about the film’s score. 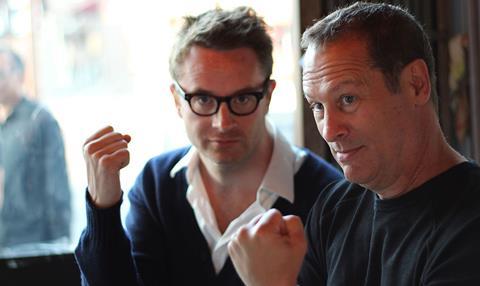 After working together on Drive and Only God Forgives, Cliff Martinez knew that Nicolas Winding Refn would want another electronic soundtrack for The Neon Demon (despite the Danish director using music from Bernard Herrmann as his temp score).

For Martinez, whose other regular collaborator is Steven Soderbergh, the main challenge in working with Winding Refn is the lack of dialogue in his scripts and therefore the reliance on music to evoke emotion.

“I was taught music should express an added dimension that isn’t apparent in the dialogue. Music needs to step in and fill in the blanks. But Nicolas takes it to another level,” says Martinez.

One sequence in The Neon Demon required a 16-minute composition. “It’s unusual for a director to leave a scene unfinished, assuming the music will complete it,” he adds.

Winding Refn now includes the composer at the development stage of his projects, admitting to Screen that he often writes in his screenplays: “This is where Cliff comes in.”

Martinez composed The Neon Demon score entirely in the studio of his Los Angeles home, discovering the key ingredient was via a new plug-in that emulates the sounds of early 1970s synthesiser the ARP 2600.

Using instruments that were lying around the house, including steel drums, Indian flutes and an electric ukulele, Martinez used a process of layering and texturing to create the film’s moody, evocative score.

“A little bit goes a long way in film music - you try to get a few balls in the air, sculpt it and spin it out into a lot of other scenes,” said Martinez, who said the main advice along the way from Winding Refn was to “keep it cool”.

“When I asked Nicolas why Ryan Gosling was wearing a weird mask in Drive, he said, ‘Because it’s cool.’ So that’s the notion I work by now - to be cool.”

The transition from rock-band drummer (he played on the first two Red Hot Chili Peppers albums) to film composer was driven, Martinez says, by “a preoccupation with computer technology in the late ’80s” and a lack of attraction to the rock-and-roll lifestyle. “Making the records was fun, but touring in a smoke-filled van year in and year out was not for me.”

Through his room-mate, Martinez met Soderbergh who took a chance with the novice composer on his 1989 breakthrough Sex, Lies And Videotape. The duo have subsequently collaborated on Kafka, The Limey, Traffic, Contagion, The Knick TV series and Solaris, which Martinez ranks as his favourite among his own scores. “Something new comes out of it every time I hear it,” he says.

The composer compares his relationship with Soderbergh to the one he has with Winding Refn, saying the two film-makers “see eye-to-eye on the function of music, placing it at the forefront of the film”.

During the recent Krakow Film & Music Festival, Winding Refn took part in a panel with Martinez via Skype. The Danish director said that on Drive - their first collaboration together - he brought Martinez (whom he had never met) on board only five weeks before the film was due for delivery.

“The producers were trying to persuade me to go a more conventional way with the music, like Kanye West,” said Winding Refn. “I was stubborn, not wanting to change my approach. Half of the financiers wanted the film to be reshot anyway; they wanted to wash their hands of it. That ultimately allowed Cliff and I to take the musical direction we wanted.”

“I supported Nicolas,” added Martinez, who quipped that it’s generally better to side with the director. “The songs were sort of a homage to 1980s synth pop so I acknowledged that in the style of the score.”

When asked why he thought the Drive soundtrack had gone down so well, Martinez shrugged: “It took me by surprise. Musically I don’t feel I did anything out of the ordinary. I just went with my impulses. It was the perfect storm of good performances, story, cinematography, editing and directing.”

Martinez has recently completed the score for the Todd Phillips-directed dark comedy War Dogs and is currently at work on Martin Campbell’s action-thriller The Foreigner, starring Jackie Chan and Pierce Brosnan.

The Neon Demon begins its European rollout this week in France, Italy and Scandinavia, with additional territories to follow including Germany on June 23 and the UK on July 8. The soundtrack is released day and date with Amazon’s US release on June 24.