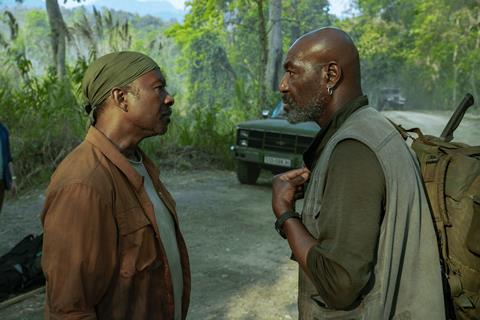 Da 5 Bloods tells the story of a group of black soldiers who served together in Vietnam in 1971. Back then, Delroy Lindo was a teenager freshly moved to the US from the UK, still adjusting to his new life – and, as he admits, the Vietnam War wasn’t really on his radar. “It was way, way, way in the background,” the actor says over Zoom. “I was young. I learned so much more about the war as a result of doing this film and the research that I engaged in.”

Indeed, it’s his performance that’s the emotional centrepiece of Spike Lee’s film, which chronicles the soldiers’ return to modern-day Vietnam, where they seek buried treasure, as well as closure for the wartime death of their comrade Stormin’ Norman (the late Chadwick Boseman). Lindo’s Paul grapples with post-traumatic stress disorder, and when his former mates reunite with him, they discover the broken man he’s become.

Shockingly, Paul proudly wears a “Make America Great Again” hat – he informs the others he voted for Donald Trump, an especially unpopular figure among black Americans – and much has been made about the fact that Lindo initially balked at portraying a Trumpite. But to get to a place of understanding Paul, Lindo resisted reading articles that profiled everyday Trump supporters. Instead, Lindo went deep inside himself.

“I engaged in a process of uncovering ‘How could this person cast that vote?’” he says, pensively. “I arrived at a place where I connected it to Paul’s disconnection and disassociation from the community – and disassociation and disconnection from self. It was a very personally oriented investigation. Ultimately, it made complete sense to me and I could empathise – I could put on that hat.”

Still, there were limits to Lindo’s identification with Paul. “For the majority of the film,” he notes, “whenever I had that hat on, I’m wearing it backwards.”

Lindo worked with Lee three times in the 1990s: on Malcolm X (1992), Crooklyn (1993) and Clockers (1995) – roles that followed a decade-long break from screen work that the actor took in the 1980s, in order to concentrate on theatre. In a sense, just as Da 5 Bloods’ soldiers come back into each other’s orbit, so too were Lindo and Lee getting reacquainted. Lindo credits his director for, among other things, handpicking actors who could believably play old friends whose battlefield bond has never been shaken.

“Every time somebody says, ‘Oh my god, that bond was so evident,’ that’s an affirmation of all of our work,” Lindo says, referring to co-stars Clarke Peters, Norm Lewis and Isiah Whitlock Jr. “But it’s also an affirmation of Spike’s ability to bring us together, to cast in the way that he does, to people his stories with individuals who can bring forth the narrative forcefully. Now, I feel equally compelled to say that it doesn’t mean that everything is perfect, because it’s not. It doesn’t mean that everything is obstacle-free. There were bumps, there were disagreements that we all had to negotiate and come to terms with. That was absolutely present on this film. But the critical component is that, in the final analysis, we got it done.”

Despite his inclusion in Screen Actors Guild Awards best cast nominations for Get Shorty in 1996, The Cider House Rules in 1999 and Da 5 Bloods this year, Lindo has, on the whole, not seen his past performances much honoured by major film awards. (The actor does have a Tony nomination, for August Wilson’s Joe Turner’s Come And Gone, in 1988.) Now aged 68, he is belatedly earning prestige awards recognition, and he has already been named best actor by the New York Film Critics Circle for his work in Da 5 Bloods.

If Lindo is finally recognised by the US Academy this year, it will be partly for his facility at navigating the myriad genres of Lee’s film – it’s part war picture, part adventure saga, part character drama. But for the actor, the physical demands of shooting in Thailand and Vietnam didn’t detract from the joy he felt being part of a rare combat film that focuses on black characters.

“We never get to be seen doing that,” says Lindo, who next shares the screen with another rich ensemble of black actors (Regina King, Idris Elba, La Keith Stanfield, Zazie Beetz and Jonathan Majors) in Jeymes Samuel’s western The Harder They Fall, co-scripted with Boaz Yakin. “Of course, it was tiring, but we’re the ones being challenged to do these things, as opposed to being spear carrier number four in the background. It was seeing [the Da 5 Bloods characters] in all of their humanity, all their courage, do the jobs that they were sent there to do.”

Da 5 Bloods is also partly a mystery in that Lee slowly reveals how exactly Stormin’ Norman died – and why Paul can’t let his friend’s passing go. When the Netflix-backed film hit the streaming platform over the summer, Boseman hadn’t yet succumbed to cancer, an illness many in the industry (including Lindo) were unaware he had. “I understand certain things that happened on set more clearly in the context of his passing,” he says. “I understand his reserve. But the thing I will always remember and cherish is how gracious he was towards my son. The nature of just how he communicated and how genuinely interested he was when he engaged my then-17-year-old son – that means a lot.”

It’s a melancholy coincidence that Lindo’s son at that time was the age that Lindo was when he moved to America, back when the Vietnam War was starting to tear the US apart. The country remains divided today, although those tensions now stem from Trump’s rise to power, which exposed long-festering racial hostility. Those national divisions are embodied within Paul, but although Lindo initially bristled at that MAGA hat, he claims he had no desire to ceremoniously destroy it at the end of filming. For him, stripping the hat of its symbolic power had happened long before.

“The catharsis was in doing the work in the first place,” he explains. “But also, I’m paying homage to Paul and the vets. I feel affirmed in having been able to do that. And I have a further affirmation in the various vets that have reached out to me after seeing the film and saying the kinds of positive things that they have said to me about the work. So my relationship to the hat doesn’t matter.”