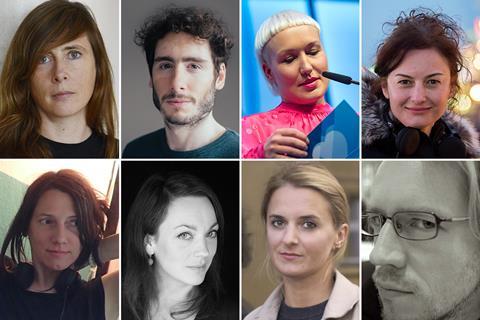 “I try to get as close as possible to my protagonists and to convey this through a floating narrative and sometimes a poetic form,” says Bürgelin of her style. “Listening to people and transporting their personal stories is always at the centre.”

Based between Berlin and Freiburg, the director of the award-winning 2017 film Millennials is a globe-trotter. After studying for a semester at the AFDA film school in Cape Town, one of her first international experiences was making Something Changed In Me, a mid-length documentary in co-operation with South African students that screened at the Human Rights Film Festival in Jordan. Other of her documentaries have played at AFI Silverdocs, London’s Watersprite Film Festival and Toronto’s Wildsound Film Festival.

Millennials was her debut feature and had its premiere at the Berlinale in Perspektive Deutsches Kino. The film was sold internationally by M-Appeal.

Bürgelin’s most recent film project is documentary Danube Diversity, working with the Association for Wildlife Protection, which depicts people in seven countries along the titular river living with climate change.

Moving between fiction and documentary, she is working on several international projects, including a documentary about the Vietnamese community that stayed in Berlin after reunification. “I’m planning a documentary series about today’s view on beauty around the world,” she says.

“For me, the most exciting thing about making movies is the ability to create exciting new worlds,” says Dünschede, whose award-winning feature debut Limbo opens in Germany on February 20 via Nordpolaris.

“During film school, I experimented with different worlds and styles and finished with Limbo, a 90-minute feature without a single cut, not even an invisible cut,” explains the director.

Before this, his short films had been generating buzz. Them (Fremde), produced by Friendship Films, won a slew of prizes at the European Cinematography awards in 2017.

Dünschede is developing several projects with writer Anil Kizilbuga, with whom he collaborated on Limbo.

“I want to make films about people who are isolated and don’t belong. It’s about showing their lives and ongoing struggles, and ultimately to create understanding and love for them,” says Berlin-based Hellsgard.

The director’s third feature tells the story of a teenager who strikes up a friendship with a Senegalese street vendor while on holiday in Spain with her family. Produced by NiKo Film, Sunburned screened in the international competition at Göteborg Film Festival last month after a premiere at Rome Film Festival in October 2019. Picture Tree has international rights and Camino Filmverleih is releasing the film in Germany in April.

Hellsgard was born in Sweden and studied film in both Berlin and at Cal Arts in Los Angeles. Her debut film Wanja, produced by Johanna Aust of Flickfilm, played at the Berlinale in 2015. Her second feature Ever After (Endzeit) was produced by Grown Up Films and premiered in the Discovery section at Toronto in 2018, helping to put her on the radar of the international film industry. The picture was subsequently released in Germany, Asia and the US.

Now Hellsgard is developing Star, a thriller for which she is looking to connect with international partners. She is also among seven female directors in the running to receive the prestigious biennial $11,000 (€10,000) SiStar award, to be presented during the Berlinale this year by SI-Club Mainz, the Rhineland-Palatinate branch of international women’s club Soroptimist International.

Hill won the 2019 German Cinema New Talent award at Hof International Film Festival for his feature debut Coup. Set in the 1980s, it is about a dissatisfied young man who steals millions from a bank and flees to Australia.

Hill studied film in Prague and has always had his eyes on an international career. He is now developing a trilogy that will blend animation, fiction and documentary, for which he is open to working with international partners.

Previous films include documentary short Scraps Of Paper, which screened at Busan and played on German TV (MDR); while the co-directed documentary The Sound After The Storm won the best international documentary film in 2009 at Zurich Film Festival.

“I love telling universal stories out of very unique and specific microcosms,” the Munich-based director tells Screen. “Stories between worlds, between different universes is where I feel at home, being born and raised in Romania, but living all over the place after we left the country.”

Lazarescu studied documentary film directing at the German Academy for Film and Television in Munich, graduating in 2011. She was lead director on the Netflix original series We Are The Wave, and on the HBO original series Hackerville, for which she received the Grimme Award in Germany.

Her second feature film Happiness Sucks, produced by Walker & Worm and ZDF, was released on Amazon Prime Video. Her documentaries One Day Today Will Be Once (2009) and The Secret Of Deva (2007) have been released internationally and travelled to festivals worldwide. She is now mulling new projects.

Writer, director and comic artist, Riemann is another of the seven directors (along with Hellsgard) in the running for the biennial SiStar award for a female director.

She was nominated on the strength of her second feature Electric Girl, a part-animated feature about a manic young woman whose day job voicing a Japanese anime superhero begins to take over her life. It premiered in the competition section of the Max Ophüls Prize Festival in 2019 and then opened at home via Farbfilm. It screened in Busan under the European Film Promotion banner.

Her third feature Get Lucky (2019) is a coming-of-age feminist comedy about six teenagers who go on holiday to the Baltic Sea. It was released by DCM in Germany.

“The style of my work is visual, colourful and influenced by my work as a comic artist. I try to bring hidden human fears and desires into irritating but entertaining movies,” says Riemann. She is now writing a dark love story that takes place in Germany in 1977.

Born to a Syrian-German family, the award-winning Chahoud studied directing at the German Film and Television Academy Berlin (DFFB) and began her career with an internship working on Martin Scorsese’s Gangs Of New York. Her high-profile German TV work includes serving as the director and writer of the ZDF sci-fi show IJon-Tichy-Raumpilot and the ZDF series Bruder - Schwarze Macht, produced by Aspekt Media. She also directed an episode of Tatort.

Chahoud’s most recent projects include English-language feature The Accidental Rebel, produced by Neue Impuls Film, in which a young man travels from Germany back to Syria to try and save his brother. The film had its world premiere at Busan International Film Festival in 2019, and went on to win the Pupils jury award for best film at Germany’s Max Ophüls Prize Festival in January, along with best young actor and best upcoming actor prizes for Mehdi Meskar.

Chahoud is now in post-production on the four episodes she has directed of the spy thriller Deutschland 89 for Amazon Prime Video, and is writing a sci-fi drama about a female spaceship commander that she hopes will be an international co-production. “My vision is to work as a director on international projects, movies and series that combine strong philosophical questions with great entertainment,” says Chahoud.

Leipzig-based Heinrich won this year’s best feature film prize for her debut feature Aren’t You Happy at Germany’s Max Ophüls Prize Festival in January and then went on to play International Film Festival Rotterdam. Described by Screen International as an “ironically ironic commentary on feminism, consumerism, art and sex”, the postmodern comedy with a bubblegum palette and a savage wit stars Marie Rathscheck as a melancholic young woman looking for a place to sleep.

Heinrich is now working with Bober on her second feature, which has a working title of The Mighty Mother. She says it will be a surrealist musical comedy, exploring radical aesthetics.