Film Bazaar: Konkona Sensharma on 'A Death In The Gunj'

Actress-turned-director Konkona Sensharma examines notions of masculinity and entitlement in her debut feature A Death In The Gunj, which is currently playing the festival circuit. 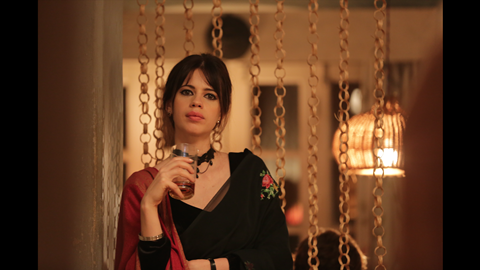 Although she didn’t set out to become a director, actress Konkona Sensharma says she became fascinated by a story her father used to tell about a tragic incident in the family a few decades ago. “The story grew in my head until I felt I had to write it,” Sensharma says. “I remember standing in my dad’s living room and thinking, ‘This could be a movie,’ then realising I had to write it down.”

The resulting film, A Death In The Gunj, tells the tale of a sensitive student who goes on holiday to the Anglo-Indian community of McCluskieganj in the late 1970s with his overbearing, middle-class family and eventually suffers a breakdown. After premiering in Toronto, the film played at Busan and opened Mumbai Film Festival, where it won the award for best Indian female film-maker.

Sensharma, who has starred in films such as Mr And Mrs Iyer and Omkara, as well as Alankrita Shrivastava’s recent feature Lipstick Under My Burkha, is the daughter of actress-director Aparna Sen. She originally wanted to find somebody else to write the script but was convinced to do it herself, with assistance from Disha Rindani. She developed it through the NFDC National Script Lab, working closely with mentor Marten Rabarts.

Sensharma’s intention was always to capture the world she had grown up in. “I’m not representative of India by a long shot but I wanted to be true to the world I know,” she says. “We speak three languages in a day, although we’re more comfortable in English, and we’re used to living with help and certain inequalities that we’re conditioned to accept.”

Those inequalities are explored in the film, in which the entitled, self-assured family carouses in the countryside, with local tribespeople looking on. But the biggest victim is the young student, played by Vikrant Massey, who is teased mercilessly by friends and relatives (played by Ranvir Shorey, Tillotama Shome and Gulshan Devaiah) and casually seduced by a family friend (Kalki Koechlin).

“I wanted to look at how everyone is not equal and why certain people are allowed to behave the way they do,” Sensharma explains. “I also wanted to look at masculinity. So often men are victims themselves of the patriarchal system — and when they don’t conform to traditionally accepted notions of what masculinity is, how does that affect them?”

Although she is relatively well-known for her acting, Sensharma says her script was turned down by Indian studios that believed it wasn’t commercial enough, and she didn’t find a producer until casting director Honey Trehan called to offer her a role in another film. He had recently set up production company MacGuffin Pictures with Abhishek Chaubey and decided to make A Death In The Gunj as the company’s first feature. Ashish Bhatnagar’s Studioz IDrream came on board to co-produce and finance the film.

The feature was shot in McCluskieganj in 31 days, with the tight schedule dictated by budget and the availability of a busy ensemble cast. “It was a challenge getting everyone together in a place like that, which has no infrastructure; this was the first film to be shot there,” Sensharma says, adding that she held workshops with the cast in Mumbai before leaving for the location.

She also faced challenges in recreating the 1970s setting, although she describes this as “the most fun part of the whole process”. “It was difficult to research because there’s not much information online about McCluskieganj in the ’70s, and my parents and the locals all remember it differently,” Sensharma adds. “But the local people helped us recreate the era by allowing us into their homes and giving us their furniture for the film.”

Studioz IDrream plans to release A Death In the Gunj in India in the first quarter of 2017, supported by a social-media campaign. Cinestaan Film Company’s sales arm, C International Sales, is handling international sales.

A large proportion of the dialogue is in English, which could help the film travel — but Sensharma says she wasn’t conscious of that while working on the project. “Indian English hasn’t been heard that much in films, so it may be a bit jarring. But I suppose we’re getting used to hearing different accents, so let’s see.”