Finding his voice: Leslie Odom Jr on playing Sam Cooke in ‘One Night In Miami’

Actor and singer Leslie Odom Jr was a natural choice to play Sam Cooke in Regina King’s One Night In Miami. The Hamilton star tells Screen how life’s journey took him to the role. 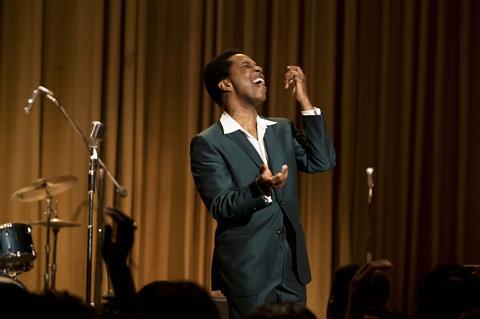 Leslie Odom Jr in ‘One Night In Miami’

One of the pivotal moments in Amazon Studios’ One Night In Miami occurs near the end as Sam Cooke, during an appearance on The Tonight Show, debuts his new song ‘A Change Is Gonna Come’, which exposes a more politically outspoken side of the R&B star. It went on to become one of the 1960s’ signature anthems — a musical snapshot from a time of social upheaval — and it has long held a special place in the heart of Leslie Odom Jr, who plays Cooke.

“The first time it really made an impact [on me] was probably Malcolm X, when Malcolm takes time to reflect before he goes to make his last speech,” Odom says over the phone. “My parents took us to see all Spike [Lee]’s movies on opening weekend. We didn’t go see films a lot, so it was a special occasion when we went.”

He was not yet a teenager when Malcolm X — and that song — left an impression on a young man already enamoured with performing. “Music and dance and film was part of the rhythm of my life,” he says, and they remain integral to the 39-year-old’s make-up. A Grammy and Tony-winning actor and singer for his work on Hamilton, Odom Jr is now a multiple SAG and Golden Globe nominee for One Night In Miami, which dramatises a legendary evening in late February 1964, when Cooke hung out with heavyweight champion Cassius Clay (Eli Goree), National Football League star Jim Brown (Aldis Hodge) and Malcolm X (Kingsley Ben-Adir), discussing their conflicting perspectives on being in the limelight during the contentious civil-rights era.

Odom Jr would seem an ideal choice for Cooke — beyond his musical theatre background, he has also released a series of albums. But the journey to playing the late performer forced Odom Jr to reconnect with adolescent anxieties of trying to find his voice. “When you’re a young singer, and you’re singing along with Stevie Wonder, you’re trying to sound like Stevie,” he reflects. “But then comes a point of real maturity as an artist when you let that go — ‘What do I have to say? What is unique to me?’”

It was by becoming Aaron Burr, the villain of Hamilton, that Odom Jr finally discovered himself. “Because the show was so special,” he recalls, “I knew, ‘This is my opportunity to stop pretending to be anybody else. This is my chance. This show has the potential to make so much noise, so I should make noise as myself, and not as baby Sam Cooke or anybody else.’”

With a laugh, he acknowledges the irony that, to play Cooke, “was, in many ways, a return to my childhood — I’m trying to sound like somebody else”. Nevertheless, his rendition of ‘A Change Is Gonna Come’ is appropriately stirring, conveying the song’s resilience while also suggesting the risk Cooke took as a black artist singing plainly about oppression. That vulnerability was a product of how Odom Jr felt while filming the scene, which was close to the end of the shoot. “I was nervous, and I felt the importance of the moment. I felt like it was the culmination of the whole film and all the work that I’d done. So I used that.”

Much has been made of the fact Odom Jr initially turned down the project, fearful of being a subpar Cooke — it took his reps to convince him he was being foolish. But even after meeting with Oscar-winning actress Regina King, who was making her feature directing debut, he was not sure he was right for the part. “I just thought, ‘He’s so important to us — not only to the country, but to my people.’ Sam Cooke is sacred. And there is something in our collective that recognises the power of that song. We all have reverence for it. We don’t just sing it any old place.”

That reverence comes through in his portrayal of Cooke, who in the film clashes with his old friend Malcolm X about the best way for black luminaries to change US hearts and minds. Is it better to be like Malcolm, a firebrand outsider demanding equality, or like Cooke, who worked within the white music industry to create opportunities for fellow black musicians? In the midst of Black Lives Matter, that debate continues. What side is Odom Jr on?

“We need both,” he says pensively. “It’s a personal choice. Malcolm’s faith allowed him to be courageous, but he probably never had a restful sleep. But he couldn’t live with himself if he would’ve allowed himself to make peace with what he saw.”

Odom Jr pivots to how his own career embodies this debate. “What I’m building looks, maybe from the outside, a little closer to what Sam built. I have decided to be in co-operation with people. I’ve decided to be a collaborator, to be a part of ensembles. But thanks to both Malcolm and Sam, I get to live more boldly thanks to the sacrifices made by the generations before.”

Odom Jr will soon be appearing in a very different period drama, The Sopranos film prequel The Many Saints Of Newark. He can’t say much, but does reveal that he had never seen the celebrated series before auditioning (“I didn’t have HBO back in the day”). Still, even if he did not know The Sopranos, he knew the world of mob cinema — like Spike Lee’s pictures, it was something he shared with his dad.

“Mob stories are a part of our mythology as Americans,” says Odom Jr, citing The Godfather and GoodFellas as personal touchstones. “We find something in those stories that resonates and entertains us decade after decade.” Only after shooting Many Saints did he finally dive into the show. “I’ve since become a huge Sopranos guy,” he enthuses. “It unfolds like a great novel.”

Although he initially said no to King, Odom Jr feels the power to choose not to do certain projects is an important one — and something he realised early on.

“I learned pretty quickly that your ‘yes’ and your ‘no’ is all you will own for a long time,” he confides. “It was the only property I had — I didn’t even own a car! But I could say, ‘Yes, I will be a part of that,’ or, ‘No, I will not be a part of that.’ That’s why I maintain this work as a sacred space. Because, every now and again, I’m a part of something like Hamilton or One Night In Miami. And these things have been little miracles in my life.”