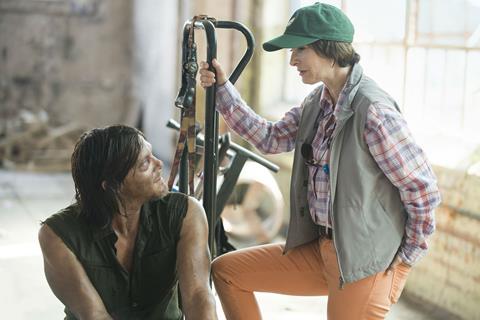 As a producer of both film and television, Gale Anne Hurd has her roots firmly in genre entertainment. From her early beginnings as an assistant to Roger Corman, working on films such as Humanoids From The Deep (1980), through to producing James Cameron’s The Terminator (1984), Aliens (1986) and Terminator 2: Judgment Day (1991) and, more recently, Louis Leterrier’s The Incredible Hulk and Lexi Alexander’s Punisher: War Zone (both 2008), Hurd has helped shepherd modern science fiction from the sidelines to the mainstream.

Over the last decade, she has brought that blockbuster knowledge to the small screen, serving as executive producer on series such as Hulu’s shadowy government thriller Hunters (2016), USA Network’s dreamlike drama Falling Water (2016) and Amazon Studios’ documentary anthology series Lore (2017) - all produced or co-produced by Hurd’s own Valhalla Entertainment.

And, for the last eight years, Hurd has been immersed in an apocalyptic wasteland populated by flesh-eating zombies as executive producer of AMC thriller The Walking Dead - which has aired more than 100 episodes since it debuted in 2010 and is now shooting its ninth season - and its spin-off Fear The Walking Dead, which is currently in production on its fourth.

Despite the fact both shows are populated by legions of the flesh-eating undead - indeed, The Walking Dead has been nominated for the outstanding prosthetic makeup Emmy every year since 2011, winning the category in 2011 and 2012 - Hurd attributes their success and longevity to the human element at the core of both. “The fact that they really are shows about the people, and not the zombies, is what has sustained them,” she says down the line from the Austin set of Fear The Walking Dead. “It’s about how people deal with loss, and how they deal with finding love in the apocalypse.

“Many of the characters are incredibly flawed,” Hurd admits. “But, at the same time, the fact they believe that we can reinvent the world and make it better next time is something that I think a lot of us would like to see. The thought that people can change for the better and, at times, for the worse, given what they are up against, is really what people are interested in.”

Adapted from the graphic novel by Robert Kirkman, The Walking Dead has remained faithful to its source material while also introducing several new characters and diverging from story-lines at key moments. For Hurd, this flexibility is absolutely essential in giving the show its own vitality and strength.

“The fact that [the show] is based on a continuing comic-book series that has fans around the world, and is also maintaining its high-level of quality, is important,” she acknowledges. “But you don’t want people to know exactly what’s going to happen, and when it’s going to happen. We have characters such as Daryl Dixon [played by Norman Reedus] who don’t exist at all in the comic book. Having new characters in the show is going to change the dynamic. We’re also able to jump back and forth in time, and to do entire flashback scenes that give you even more grounding in character.”

With Kirkman still creating and writing new issues of The Walking Dead graphic novel, there is plenty more of the story for audiences to look forward to. Yet, for the show’s vocal international fans, one version of this particular zombie apocalypse simply was not enough.

“People kept saying, ‘We’d love to see what would happen if the show was set somewhere else. We’d love to see more characters that aren’t from the comic books’,” says Hurd of the huge demand that brought spin-off show Fear The Walking Dead into being in 2015, also on AMC. “The only way to really satisfy that was to start a new series. It was something Robert Kirkman wanted to do as well, so he co-created it.”

With Fear The Walking Dead playing out first in Los Angeles and then Mexico - a huge contrast to The Walking Dead’s Georgia landscape - and similarly following a core group of characters (in this case a family) as they attempt to navigate and adapt to the new world order, the show offers audiences the opportunity to view the same events from a different perspective - particularly through the key character of Morgan, played by Lennie James, who crosses borders from one show to the other.

“We have 16 episodes per show, so that’s 32 per year,” notes Hurd, who compares the experience of creating the two series to writing a novel every year. “Across the two shows we have 20-plus series regulars, and in the new season of Fear we also have considerable time jumps to keep track of. Scott Gimple [former showrunner of The Walking Dead] is now the chief content officer for The Walking Dead universe on television. He always knows where the show is going, and can also make sure that Fear doesn’t veer into similar territory.” 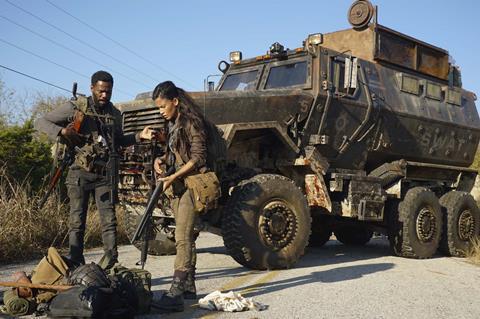 Colman Domingo and Danay Garcia in ‘Fear The Walking Dead’

While two intertwined shows makes for exciting television, it presents something of a logistical challenge for Hurd. She spends around 50 weeks of the year in production, splitting her time between The Walking Dead’s Atlanta set, Fear The Walking Dead’s Austin location and Prague, where the second season of Lore is currently shooting.

“Lots of frequent-flier miles,” she laughs, while noting that she manages to remain as involved in both The Walking Dead and Fear as ever.

“All of us executive producers hear the pitch from the showrunner for the season, we give feedback from the very beginning,” she says. “We’re involved in all of the casting for every character on both shows. I read all of the outlines, all of the scripts, and give feedback. I have to say I watch fewer dailies than I used to, but I do watch every cut of the show. It’s also important to visit the set and spend time with the cast and crew. That’s the way to know how things are really going, as opposed to just reading the production report.”

Another element that binds both The Walking Dead and Fear The Walking Dead is the shows’ shared commitment to diversity, both in front of and behind the camera. Both series have been praised for their eclectic casts and plethora of women involved in their making, including series writers such as Angela Kang (now The Walking Dead’s showrunner) and directors such as Michelle MacLaren and Deborah Chow and Fear co-executive producer Kate Barnow.

“Diversity has been important to me going back to my film career,” says Hurd. “It’s important to have diverse points of view behind the camera, and in the characters that are written, so that anyone who is watching the show can hopefully see someone who represents their perspective on screen. It’s also important not to present a cliché, where we only seen people of different ethnicities, or women, in positions that are subservient to white men.”

Indeed while The Walking Dead and Fear The Walking Dead may be set in a fantasy world of marauding zombies, Hurd believes that the real-world messages of strength and community are crucial to their ongoing and widespread appeal. In particular, she cites characters such as The Walking Dead’s Carol (played by Melissa McBride), who entered the show as a victim of domestic violence and is now one of its most fearless leaders.

“It really does empower people who may feel that they have no power,” she says. “I think we’re living in times where you really don’t feel as if one person can make a difference. The shows demonstrate that you can. Through the medium of television and books and film, we can normalise the world we would like to live in. We’d all like the opportunity to make the world a better place.”