Screen talks to the Bafta and Oscar nominee. 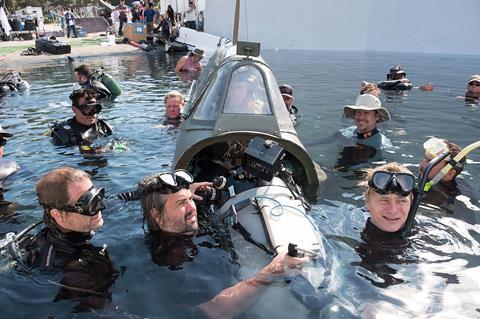 When Christopher Nolan set out to tell the story of Operation Dynamo, the mass evacuation of more than 300,000 British and Allied troops stranded at Dunkirk in May 1940, the UK-born writer-director wanted to eschew the traditional war-film approach for something more cinematic, more suspenseful, that emphasised intensity and human experience over political manoeuvring.

And so, with a script stripped of backstory and dialogue, and employing a fragmented structure of land, sea and air, Nolan adopted a subjective point of view to immerse the audience in the chaos of the rescue mission: to put them on the beach, on the deck of a pleasure cruiser chugging across the Channel or inside a Spitfire fighter plane. He wanted it to be “virtual reality without the goggles”.

“It was very important for us to make a piece that was visceral, that people could feel on a gut level,” explains Dunkirk’s Swiss-born cinematographer Hoyte van Hoytema, who first worked with Nolan on Interstellar. “We wanted people to be immersed in the situation, in the terror. Disorientation is a very important emotion in those kids on the beach. You’re constantly bounced out of your comfort zone, and not being classic in your storytelling helps convey that feeling.”

Nolan has been Hollywood’s biggest proponent of large-format Imax cameras since he first used them for several sequences in 2008’s The Dark Knight. “Imax is one of the brightest and clearest windows on to the world,” adds van Hoytema. “It’s such a cinematic experience, made for a bigger screen; an image that wraps around you. We wanted to create images you could almost touch with your fingers.”

Ultimately, van Hoytema shot around 75% of Dunkirk in Imax, often carrying the weighty camera on his shoulder, into battle like a weapon. “The camera was always a very stubborn, big chunk of machinery that would slow things down, so it became very important to free up the camera and to make it act as any documentary camera would. We did a lot of engineering to be able to place it in situations that normally you wouldn’t.”

Nolan’s desire for immersion and authenticity extended to filming with whatever natural light was available in the weather conditions they encountered on any given day. “We wanted to meet those elements the way those soldiers would have met them, and include them into the film somehow,” says van Hoytema. “This meant we had to be quite tolerant towards continuity. Continuity suddenly becomes a fairly banal, unnecessary film rule.” 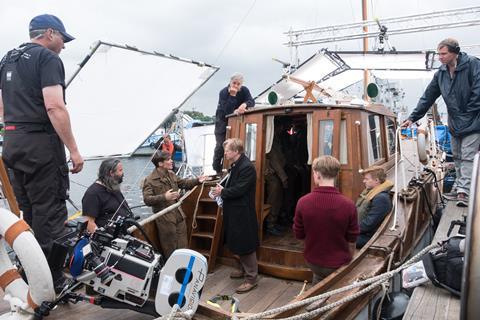 Van Hoytema and Nolan on set

Nolan chose to restage the evacuation on the real Dunkirk beach, using several hundred extras as well as cardboard cutouts of soldiers. “We started scouting with an open mind, but very early on it became evident that the beach was unique — in its light, the way it spread, and how it is approachable and at the same time unapproachable,” recalls van Hoytema.

“It was also when the decision came that we had to incorporate whatever that beach brought to us in terms of weather. We have long sequences where we had this weird foam that gets washed on the beach, which we used in the film. This beach gave us so many extra visual elements and a sense of being there that we wanted to utilise to its fullest. But that also brought a lot of problems. We were there from morning until sunset, ploughing through it in a very physical sense, trying to conquer the elements in terms of the wind, the water, the tides and the sand that was constantly blowing. Maintaining the equipment was a big challenge.”

Prior to filming, Nolan and van Hoytema took to the skies in two-seater Spitfires. “It became very evident to us that you rarely see the physics of dogfighting and the physics of flying — the perspective shifts, the spatiality — and also the claustrophobia in the cockpit,” says van Hoytema.

“Chris and I were both struck by the physical difficulty of flying, of lining up and trying to take an enemy down. That was something we wanted to portray. It became evident we needed the camera up there, with the pilot, and shooting over to other planes, to understand the space and the proximity of those machines.” That was a challenge given the size of the Imax camera, so van Hoytema had Panavision engineer a snorkel/periscope lens that allowed him to film inside the cockpit with the camera mounted outside, “almost like a GoPro”.

In addition, the production used a Russian Yak mocked up as a Spitfire with an Imax camera mounted on the wing, and a Piper Aerostar with Imax cameras in its nose and tail that was used to follow the Spitfires during their dogfight. “A lot of that footage you see, there’s no trickery,” says van Hoytema. “It’s all for real.”

Around a dozen boats were used for filming, from reconditioned warships to a flotilla of smaller civilian craft. Each provided a unique challenge, as van Hoytema shot both on and in the water, using the Imax camera mounted on boats, on a crane rig that enabled it to track across the water, as well as operating it handheld. “We had an extremely good marine co-ordinator who could position the boats, knew the weather and knew the winds,” he reflects. “But it’s hard [enough] to stand up straight on a boat that gets bounced around by waves; imagine trying to hold an Imax camera on there. There are a lot of physical forces you have to work with and conquer. For the small boats, we found that handheld was the right language to use, because your body almost intuitively compensates for the way your horizon bounces. Your legs sort of keep your body straight with the horizon and are one of the best camera stabilisation systems you can imagine. But these cameras are very heavy, so I had a very good and very sensitive key grip who placed the camera on my shoulder, kept it supported, and would save me when I was about to smash my head or drop backwards.”

Read more: Christopher Nolan explains why ‘Dunkirk’ was a gamble that required a “leap of faith”