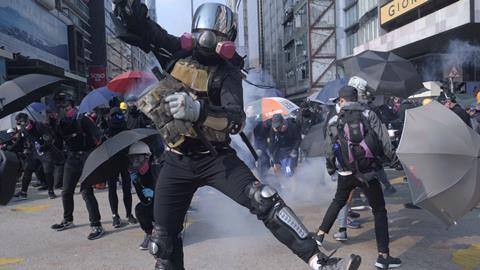 “I can’t hide my identity”: Hong Kong filmmaker Kiwi Chow on his surprise Cannes selection ‘Revolution Of Our Times’

In an unusual move, the Cannes Film Festival added Kiwi Chow’s Revolution Of Our Times as a surprise late entry, just one day before its world premiere on July 16.

The 152-minute Cantonese-language documentary offers an unflinching look at Hong Kong’s latest pro-democracy movement from 2019-2020, sparked off by a proposed security law that allowed extraditions to mainland China.

The documentary presents not only an overall macro view of the movement, but also a more personal account of seven groups of frontline protestors categorised as the sentries, the drivers, the elderlies, first-aiders, mothers and fathers, the reporters and the valiant.

Screen spoke with the Hong Kong director after yesterday’s special screening. Chow first gained recognition as one of the five directors behind dystopian omnibus feature Ten Years (2015), which won best film at the 2016 Hong Kong Film Awards but was reportedly banned in China.

Last year, his romantic drama Beyond The Dream was a box-office success in Hong Kong despite the pandemic and received the best adapted screenplay award at Taiwan’s Golden Horse Awards.

How did the Cannes premiere come about?
I didn’t have any connection with Cannes. I simply made an online submission. The edit was almost final, before colour grading and without music. Then their confirmation came in early June that they would take the film. I had about one month to complete the final post-production before I delivered the DCP in early July. The festival helped with the French subtitles.

You didn’t travel to Cannes and you chose to stay in Hong Kong even after news of the documentary was made public.
The festival had invited me, but I wanted to be with my family in Hong Kong. The film made it there, that’s more important. If I leave Hong Kong because of fear, it’s not freedom but painful to me. I know it’s contradictory to say that I feel freer and safer staying back. I’m a Christian and I follow the Bible’s teachings of “We suffer for the cause of righteousness”. It was a decision made together with my family. But the film is out of Hong Kong, with nothing left behind. I have authorised a foreign company to handle it going forward.

What was your intention in making this documentary?
I’m not involved in politics. As a filmmaker, I’m curious about people and the world. It’s very meaningful if I can record such a huge historic event. I just want to document the people behind the masks, who they are, their background and their inner world. Some foreigners had the wrong perception about the protests. As I see the foreign audiences as a sheet of blank paper, I included more explanations in the documentary. I may have explained too much.

From the very beginning, it’s clear that the project is meant for the world as well. A businessman who liked ‘Self-Immolator’ from Ten Years approached me in August 2019, two months after the start of the movement, to tell the story to the world. The project started from there. Principal photography wrapped in January 2020.

The film’s title, Revolution Of Our Times, is the second half of a widely adopted protest slogan, with the first half being “Liberate Hong Kong”. Have you considered dropping it now that the slogan has become politically sensitive after the new national security law came into effect in June 2020?
This slogan is the most suitable as it represents the overall vision of the film. The focus is not on a single incident, just the storming of the Legislative Council, the siege of the Hong Kong Polytechnic University, or the gangsters’ attack in Yuen Long, but all of these and more.

The first trial under the national security law has just started. It’s about speech crime. But I have decided to stick to this title because freedom of speech is part of human rights. I have not done anything wrong. If it’s against the law, spell it out clearly. Now the red line is not well defined.

The poster cites it as “A Film by Hongkongers”, suggesting it was a collective effort, and your name as director is not even listed there.
Just like the leaderless mass movement, the film was a collective work. Many people contributed to it, including the archive footage from other sources such as journalists or citizens. I did think about not putting my name in the film at all, and one friend was even willing to lend his name if anything happens. But I have to be responsible for the project and for the people who trusted me and risked their lives talking to me. I can’t hide my identity.

‘Self-Immolator’, your segment in Ten Years, was fictional despite its prophetic tone. But you’re showing real events unfolding in the documentary. How do you feel about seeing your vision in ‘Self-Immolator’ become a reality?
I made the documentary with a heavy heart. During the filming of the documentary, I witnessed a young female protester being beaten by the police with their baton. I had the same scene in ‘Self-Immolator’, but that was staged, not real. It’s the agony of a documentarian who can’t do anything to something that happened right before my eyes. She’s just so close to me that I can even touch her.