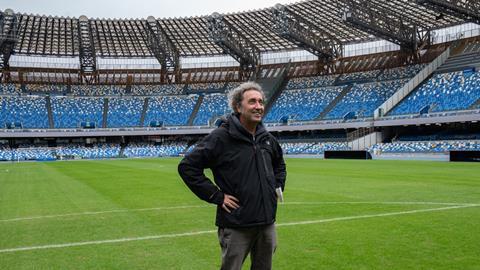 “It was extremely painful to write, but joyful to shoot,” says director Paolo Sorrentino of ‘The Hand Of God’

The Hand Of God is a love letter to the city of Naples and the footballer who brought joy to Paolo Sorrentino in his youth. Screen talks to the filmmaker and key collaborators about realising a nostalgic vision

In mid-November, Paolo Sorrentino held the screening of The Hand Of God that mattered most to him: he brought his latest feature back to Naples, the city where the autobiographical movie is set.

Members of the SSC Napoli football team, who played alongside club legend Diego Maradona when they twice won the Serie A league title in the late 1980s, were in the audience. So were some of the fans with whom Sorrentino watched the team during that period dramatised in the film.

This is the first feature producer Lorenzo Mieli has made with the director, although they collaborated on TV miniseries The Young Pope and The New Pope for Sky and HBO. This time around, the pair were working with Netflix. 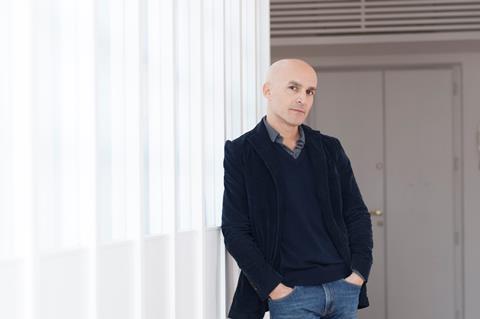 “The Netflix discussion came about as soon as he [Sorrentino] brought the script to me and we talked about how delicate [and] intimate it was, and how different from his other movies. We thought it was, at the same time, a small movie and potentially universal,” the producer recalls.

Sorrentino had seen Alfonso Cuaron’s Roma, also a deeply personal project that was supported by the streaming giant. “The decision to go with Netflix happened at the beginning,” says Mieli. “Auteurs are always struggling in the market. We probably could have gone down other routes but they [Netflix] are a strong commercial partner and platform that knows exactly what auteurs need — and they need auteurs. They know what a producer and what an auteur needs, and what the audience wants in this specific arthouse filmmaking world.”

Netflix released The Hand Of God theatrically in early December, and is adding it to the platform on December 15. Following a Silver Lion grand jury prize at Venice in September, the film has netted three European Film Award nominations (for film, director and screenplay) and is Italy’s contender for the international feature film Oscar.

The Hand Of God was made in Naples in the late summer/early autumn of 2020, at a point when the Covid-19 pandemic seemed briefly to be in retreat. The filmmakers took some sensible precautions — they shot the biggest, most complex scenes first, just in case further lockdowns intruded — a wise move. Cases began to rise sharply again by early autumn.

The coming-of-age drama offers a portrait of the young man beginning to find his vocation as a filmmaker, while also discovering the joys of sex in very unlikely circumstances. His alter ego in the movie is Fabietto, played by newcomer Filippo Scotti. On a darker note, the film deals with the devastating incident in Sorrentino’s teenage years when his parents were killed by carbon monoxide poisoning.

The film can also be seen as the director’s homage to his hometown. The opening shot glides across the bay toward Naples, which looks like a magical kingdom in the distance. 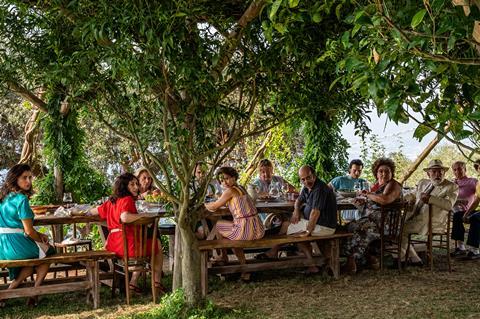 “It has this very sensual movement and it was very exciting to shoot,” says director of photography Daria D’Antonio, herself a proud Neapolitan. She joined Sorrentino and a few other technicians huddled in a helicopter, trying to get the shot just right. “That beginning was so passionate and so very much in line with the rest of a film that, in my perception, is a love declaration to the city of Naples.”

Sorrentino agrees. “It is somehow a classic beginning,” he asserts. “The city is one of the protagonists of the film, and I thought it was a good idea to introduce this character in the opening shot.

“Also, it is a reference to the destiny of the city — a city that was created and built thanks to the people who came from the sea and decided to settle down there. Then, it is such a beautiful view and landscape, this way of passing from the silence of the open sea and the sky to the chaos and liveliness of the city itself.” 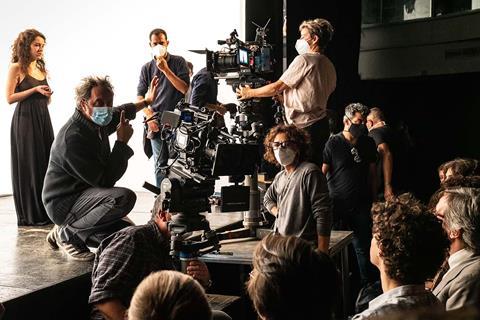 Paolo Sorrentino and Sofia Gershevich with Daria DAntonio on the camera, ‘The Hand Of God’

Naples has not changed much since the 1980s; there was an earthquake in southern Italy in 1980 but that mostly affected the city’s outskirts. The main structural changes were made in the 1960s — and so it was relatively straightforward to recreate the Naples where Sorrentino grew up.

Many other films have been set in the city but Sorrentino wanted to “give a new take”. This is Naples through the eyes of the daydreaming Fabietto.

“We tried to focus on the emotion of the story we wanted to tell,” says D’Antonio. “We relied of course on our memory to portray the city in the way that a boy would experience it at that age.”

There is a defiance in the project too. With his 2013 feature The Great Beauty, Sorrentino may have made one of the great recent films celebrating the city of Rome, but he is from the south of Italy. As a teenager, he, like all those other Neapolitans, greeted the 1984 signing of Maradona for SSC Napoli as a second coming. They knew he was their best chance of defying the dominant north.

Beating rivals such as Inter Milan, AC Milan and Juventus of Turin was about more than football. “It was a revenge for the whole city being considered a ‘B series’ city, compared to the rest of Italy,” says D’Antonio. Like Sorrentino, she watched Napoli’s home matches during the Maradona era and has vivid memories of how the city turned a light blue — the colour worn by the team — during the celebrations of Napoli’s success. “Finally, we had our revenge through soccer. We no longer felt marginalised.”

Turning to darker memories, Sorrentino acknowledges it was tough to revisit the loss of his parents, especially during the film’s script stage. “It was extremely painful to write the film. It was painful, but also joyful, to shoot it. Now that it’s over and I keep on talking about it, I find a sort of emotional distance because I am somehow getting used to the feelings that are in the film,” muses Sorrentino. “I keep on seeing it over and over again. I have learned to live with this objectification of my own experience. It has become something outside of me, in a way.”

The director chose Scotti to play his younger self for practical reasons. The actor, now 21, was simply the best of the many prospective Fabiettos he came across in the auditions. “He had a natural inclination toward some very intimate form of loneliness that somehow mirrored myself, the way I was as a teenager and an adolescent,” adds the director. 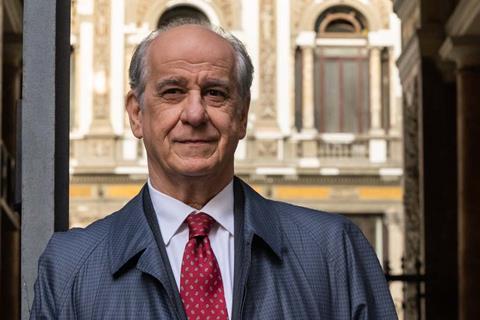 Toni Servillo, ‘The Hand of God’

As for Toni Servillo — who starred in Sorrentino’s 2001 debut feature One Man Up and again in The Consequences Of Love, Il Divo, The Great Beauty and Loro, and who plays Fabietto’s father — there is not much physical resemblance with the filmmaker’s real-life parent. “I don’t think there are similarities between Toni and my father from a human point of view. But it is true that I’ve come to consider Toni as a fatherly figure,” says Sorrentino.

“He has always been very straightforward in telling me when I’ve been making mistakes and how to mend [them]. In that, he had a very fatherly attitude toward me. It came very naturally to entrust him with this role. I hadn’t thought of anyone else.”

Alongside its darker moments, The Hand Of God features plenty of carnivalesque and comic scenes that rekindle memories of similar moments in Federico Fellini’s films. Ferocious old women are shown chewing on gooey white lumps of burrata. Pranks, slapstick and family rows are all part of the mix — and family is always to the fore.

“It was a very complex scene shot over many days,” D’Antonio says of a family meal setpiece in the early part of the movie, shot outside in natural light. Sorrentino used four different cameras so the actors could move freely without worrying about being in or out of frame. “The priority was to shoot the people, regardless of light conditions,” recalls the DoP. “Those four cameras were just running round the table. I was very stressed because the weather was changing all the time.”

D’Antonio’s concern did not abate until Sorrentino took her to one side and told her not to worry. This lunch was not supposed to be a single meal but “the summing up of all the Sunday lunches of our lifetime”. At that point, she was able to relax. “Those four cameras started dancing around the table, like in a choreography… it’s one of the scenes I love the most because it mirrors my own childhood.”

With a nod to the master, Sorrentino acknowledges the influence of Fellini on all of his work. “I try to narrate in my films what Fellini told us in his. That is to say, a human being that feels unfit to inhabit our world, that feels the earth trembling under his feet and that tries to overcome this feeling of being inadequate through an irony that can be mischievous and can be also mean. In this narrative architecture Fellini has built, I mirror myself.”

The filmmakers were not able to contact Maradona before the footballer’s sudden death at the age of 60 in November last year — four months after the star’s lawyer announced his client was considering legal action against the film for misuse of a registered trademark. “He was very difficult to have contact with,” recalls Mieli. The producer acknowledges, though, the symbolic influence Maradona has had on Sorrentino’s life and career. “He [Sorrentino] thinks Maradona saved him… he was an image of freedom and happiness in his youth. I believe [the film] is an act of love to Maradona.”

The Italian director’s eyes still light up on mention of the Argentinian superstar. On considering, for example, his favourite goal scored by the footballer, Sorrentino begins to sound like the awestruck Fabietto in the movie. He talks about a free kick against Juventus when the ball was laid off to Maradona in a crowded penalty area.

“It had been ages in which Napoli could not win against Juventus… it was near to impossible for him to score that goal,” Sorrentino enthuses of a moment he still clearly cherishes as much as his own cinematic triumphs. “I was present in the stadium. It was pouring with rain. The shot went against all the laws of physics!”