"It was like a real battlefield": making South Korean box office hit ‘Escape From Mogadishu’

South Korea’s Oscar submission is based on the true story of how enemies came together to flee Somalia’s 1991 civil war. Screen talks to director Ryoo Seung-wan about box-office hit Escape From Mogadishu. 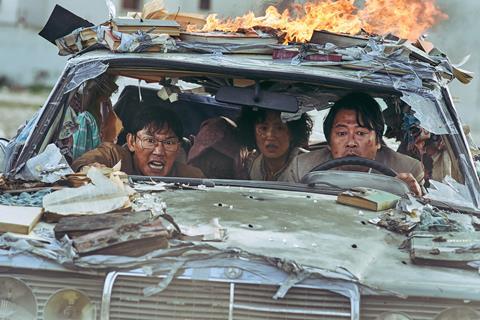 Anyone who has been paying attention to South Korean cinema in the past couple of decades will be familiar with Bong Joon Ho (Parasite), Park Chan-wook (The Handmaiden) and Kim Jee-woon (The Good, The Bad, The Weird). Those paying even closer attention may also know the youngest member of the group of Korean auteur directors adept at mixing action, thrills and drama: Ryoo Seung-wan, whose Escape From Mogadishu is the country’s submission to this year’s international feature film Oscar.

Based on actual events, the film tells the story of how stranded North and South Korean diplomats — who had been bitter adversaries — worked together to get themselves and their families out of Somalia’s capital after civil war erupted in 1991.

“My films always involve a lot of action and danger but this production had the most,” notes Ryoo. It included scenes of violent demonstrations and a car chase featuring a caravan of four diplomatic cars that boasts an ambitious one-take shot moving through the interior of all four vehicles.

Ryoo’s credits include boxing feature Crying Fist (2005), starring his brother Ryoo Seung-bum and Choi Min-sik, which played in Directors’ Fortnight at Cannes; The City Of Violence (2006), a crime film that saw the director co-star with action choreographer Jung Doo-hong and screened in Venice’s Midnight section; and Veteran (2015), starring Hwang Jung-min and Yoo Ah-in in a face-off between an incorruptible cop and the very corrupt heir to a conglomerate. The latter film clocked more than 13.4 million admissions and $89m at the South Korea box office and is, to date, the country’s seventh biggest hit in cinemas.

With a production budget of $18.3m, Escape From Mogadishu shot on location in Morocco, from November 2019 to February 2020, just ahead of the Covid-19 pandemic. Bringing in actors from Korea, Kenya and other African countries, the production also required multiple interpreters, with English, French, Spanish and Korean in the mix. The Korean cast includes Kim Yoon-seok (The Chaser), Zo In-sung (A Dirty Carnival), Huh Joon-ho (Netflix’s Kingdom) and Koo Kyo-hwan (Peninsula).

“The shoot was tough,” says Ryoo. “It was like a real battlefield, with everyone shouting and running because of the distances and the limited range of the walkie-talkies.” But in the end, aside from the unreliable 1980s cars, the most serious incident came when Huh hurt his back acting out the impact of a car collision.

Originally, director Kim Yong-hwa (Along With The Gods franchise) was developing the script at his VFX and production company Dexter Studios, which also backed Escape From Mogadishu alongside Lotte Entertainment. He proposed Ryoo take it up, which he did on condition he could rewrite the entire script with a more realistic focus and have complete control over the project.

Ryoo’s extensive research included interviewing Kang Shin-sung, the former South Korean ambassador to Somalia whose memoir was the starting point for the project, along with other diplomats who had been stationed in Africa, and North Korea experts at the ministry of foreign affairs. Former war correspondent Tae Sang-ho was on the crew, looking after firearms safety and contributing ideas. During pre-production, Somali students studying in Korea were asked to visit the office regularly to fact-check, calling home to their families to make sure details were accurate to the era and language.

Lessons of the past

As a director from South Korea, a country that has itself experienced colonial rule, civil war, military dictatorships and democracy struggles, Ryoo sought to avoid portraying the Somalis as templated villains or mere obstacles to the protagonists’ escape. “For Korean audiences, violent suppression of demonstrations is a familiar sight,” he says. “Corrupt government officials are the same. A minority of corrupt leaders can drive a lot of people to pain and strife, and the chaos that nations experience after colonisation extends into individuals’ lives.

“Rather than trying to portray characters in a good-versus-evil structure, I thought it was more important to show the situation of this disaster — this war, and how people were brought down by it,” Ryoo continues. “What was important was the characters’ terror and suspense in the midst of this sort of disaster situation. Even more than the spectacle of the action, the suspense was important.”

That approach paid dividends with audiences in Korea: despite pandemic restrictions, Escape From Mogadishuclocked up more than 3.6 million admissions and $29.4m on release this summer. It remains the top box-office hit of the year while sweeping up local awards such as the Blue Dragon for best film, director and four other categories. Well Go USA released it in North America to a pandemic box office of $346,000. It is currently available for streaming online.

Ryoo’s longtime producer, company partner and wife Kang Hye-jung produced Escape From Mogadishu alongside Ryoo and Kim Yong-hwa. “Like any other filmmaker or writer who grew up in Korea, Ryoo Seung-wan can’t help but pay close attention to the dynamics of how society flows, and that informs how he shapes his characters and their stories,” she says.

Ryoo grew up in a well-off family that lost its affluence and both parents when he was in middle school. After that, he raised his brother while living with their grandmother. In Kang’s view, these experiences contributed to Ryoo’s “visceral” understanding of how different people can grow and what sense of justice they might have in different situations.

That sort of astute portrayal of Korean society saw the couple on ex-president Park Geun-hye’s infamous blacklist of cultural figures, alongside the likes of Bong, Park and Kim. However, it was controversy over historical action film The Battleship Island (2017) that had a bigger impact. Set during the Japanese colonisation of Korea on an island where people were tricked into forced labour in mines, the film was thoroughly researched but attacked for reimagining what could have happened had the US intelligence services become involved with Korean independence fighters who staged a great escape.

“This is a wound that has not been healed and we are not free from this unresolved history. It made us more careful in choosing how to do this film,” says Kang.

Ryoo is currently in post-production on 1970s-set Smuggling (working title), about traditional women sea diver-gatherers who get caught up in illegal trafficking. As for Hollywood, he has been fielding offers since The City Of Violence, but says he is not interested in just being a director for hire. “The fundamental strength of my films comes from the team I work with and the control I can have over a production,” he says. “If there is a good story and wonderful actors, I’m open to working anywhere.”