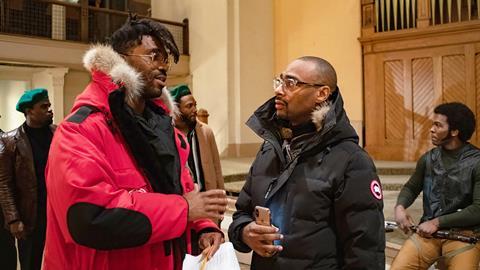 Shaka King knew Hollywood would never greenlight a straightforward biopic about Fred Hampton, the 1960s Illinois Black Panthers leader whose life was cut short at the age of 21 in a police and FBI raid. Instead the writer/director of Judas And The Black Messiah, who was making a living as a TV director since his Sundance 2013 comedy Newlyweeds but had yet to deliver a second feature, adopted a different approach.

“If we had gone to the studios and said, ‘Hey, we want to make a movie about Fred Hampton,’ they wouldn’t say, ‘Oh, we’re very excited to hear that because we’ve been waiting for someone to do that our whole lives,’” says a deadpan King. “They’d be like, ‘Who is Fred Hampton?’ And so instead, when you say you want to make an undercover movie set within the world of the Black Panthers, they know the Black Panthers and they know undercover movies well and the success of them, and they could see that movie as a good piece of business.”

The calculation was spot-on although it would not be the only time King and his team would reckon with a system whose white racial foundations have come under increasingly close scrutiny amid an industry-wide clamour for diversity and a broader civil-rights activism.

Chief among his collaborators have been Judas producer/financier Charles King of Macro and producer Ryan Coogler, who directed Marvel Studios’ global smash Black Panther. “This movie doesn’t get made without Ryan and Charles,” King asserts on a late-night Zoom call in March. “If you were to draw a Venn diagram or family tree of the black directors starting to get their work out there, you would find connectivity to other black directors and producers. That has been behind this resurgence, if you will, of black cinema.” 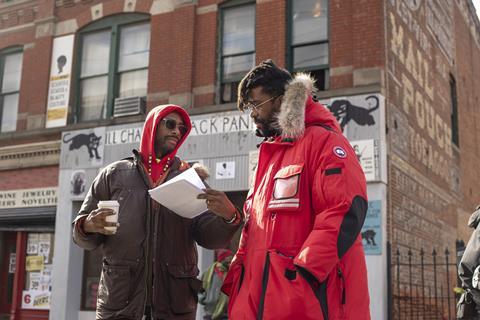 In 2016, long before Judas would earn six Oscar nominations (best picture, original screenplay, cinematography, original song, and Daniel Kaluuya and LaKeith Stanfield for supporting roles) and become the first best picture nominee to have an all-black team of producers, there was the pitch. Shaka King, an avowed fan of 1970s crime cinema, had been approached by comedians Keith and Kenny Lucas. They had a screenplay about Hampton and William O’Neal, a small-time criminal who cut a deal with the FBI and infiltrated the Illinois chapter of the Black Panthers.

As the film recounts, O’Neal got close to Hampton and served as his head of security, all the while feeding the Feds information on the group’s activities and ultimately setting the scene for the assassination of Hampton in his Chicago apartment one morning in December 1969.

The Lucas brothers had hit a wall getting their film made at the studios and had pitched their idea as The Departed set inside the world of COINTELPRO, the FBI initiative that as the writer/director puts it was “designed to crush voices of dissent within the US”. Shaka King loved the pitch and broadened the story after he met comedy writer Will Berson in 2017, who had written a Hampton biopic of his own. Over the next six months they wrote many drafts. When he told his friend Coogler about the script, the latter agreed to produce through his company Proximity and reached out to Charles King, the former top Hollywood agent and head of producer/financier Macro, who had been a driving force behind the likes of Fences, Mudboundand Roman J. Israel Esq.

Both Kings and Coogler were among the founding members of an organisation called Blackout For Human Rights. Charles King read the script and in early 2018, several weeks after the auspicious theatrical release of Black Panther, agreed to join as producer, committed to half the budget, and eventually persuaded Warner Bros to sign on as studio partner and co-financier.

The final screenplay is, Shaka King says with a chuckle that does not entirely mask an underlying exasperation, a very different beast from the early drafts. “We wrote several versions of this movie,” he says. There was the ‘Battle Of Algiers’ ensemble involving “unheralded individuals” in the civil-rights movement like Ronald ‘Doc’ Satchel and Wanda Ross that refused to go below 200 pages, while lengthy exposition and the undercover elements of the story beefed it up to 250.

Charles King drew up a plan, modelled a budget that is understood to be $27m, and took it out to the market. There had been interest from other studios, but Warner Bros was “by far the most interested party” and was able to work as a co-financier within the budget parameters.

“We were very committed to Shaka’s vision for making this a commercial worldwide theatrical release feature,” says Charles King, who acknowledges the budget “made some people slightly nervous” but was determined to protect it. 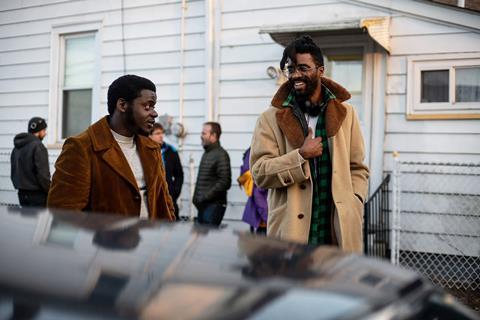 Shaka King was assembling the cast he wanted: Daniel Kaluuya would play Hampton, the black messiah; LaKeith Stanfield was the Judas figure O’Neal; Dominique Fishback was Hampton’s girlfriend Deborah Johnson (now known as Akua Njeri); and Jesse Plemons was O’Neal’s FBI handler Roy Mitchell. After some back and forth, the filmmakers secured the approval of Njeri and her son Fred Hampton Jr, and the 41-day shoot took place in Cleveland, Ohio (doubling for Chicago) in late 2019.

Kaluuya had worked with a dialect coach and an opera singer, who trained him to speak from his diaphragm for Hampton’s speeches. The UK actor — who has picked up a supporting actor SAG award for the role — was on the ground a month before cameras rolled, while Stanfield arrived a few days prior. The actors had worked together on Jordan Peele’s 2017 breakout horror Get Out and were happy to reunite. King kept the rehearsal brief, not just out of necessity but by design. “I want to see in rehearsals if we can just sniff what we’re going after,” he says.

“One reason for shooting in Cleveland — beyond the tax credit, which was important to get the budget — was the fact Cleveland is in a lot of ways a city trapped in time,” says the writer/director, who would work on post-production remotely during the pandemic. “We had stumbled upon these locations that were characters in and of themselves. Black Panther headquarters, the people’s church, the bar… we immediately knew. All these locations gave the movie a texture and level of authenticity that matched the performances, the cinematography and the costumes. Everyone really pushed themselves and you come away with a film that feels alive, like an indie film on a studio budget.”

The producers were under pressure to cut the budget but held firm. Macro and Proximity deferred the bulk of their fees, and Macro raised its stake to around 55% of the budget. Charles King later brought on trusted former collaborators Participant and Bron Creative as co‑financiers.

When the first trailer dropped in August, it sparked a social-media backlash over the casting of a British actor in Kaluuya as a US historical figure. “I cast Daniel off pure intuition,” says Shaka King. “I could feel in my bones that this person was right for the role and I think he proved that he was. At the same time, I have a theory as to why you see black British actors portraying Americans.

“When they’re looking at mid-budget films, some of these studios are potentially saying, ‘David Oyelowo [who portrayed Martin Luther King Jr in Selma] or Cynthia Erivo [abolitionist Harriet Tubman in Harriet] can also sell us the UK as a territory. They can also potentially even sell us former UK colonies as territories. It isn’t this idea that black British actors have better training because I think any filmmaker worth their salt knows there’s myriad ways to perform in a film.” 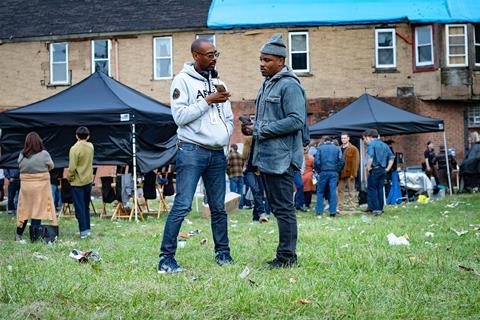 For years there has been the perception among some studio executives and sales agents that black actors do not perform at the international box office or cannot sell a film outside the US. Charles King isn’t buying it. “The global success of movies like Black Panther and Crazy Rich Asians makes it harder for the entrenched establishment to continue to say this or that was an outlier,” he notes.

The perception is one of the challenges in what he regards as an otherwise hopeful industry trajectory. “I’m definitely seeing more interest in telling a wider range of stories from diverse storytellers and communities — from studios, absolutely from streaming platforms, and also from independent financiers.”

Shaka King adds: “Getting an opportunity to tell the story was a big shift for me. Newlyweeds got me an agent but it didn’t give me a job. It wasn’t until my short Mulignans that I got my first professional job within the industry and I was a TV director exclusively until this second film. After this film, it’s not going to take me seven years to make another feature. I know this film’s done a lot for me as a director and artist.”

The filmmaker elaborates on recent comments in the press about his “bittersweet” reaction to the Oscar nods for Judas. “You are talking about a statistic that is not a proud one. A friend pointed out the power of three black men [as the film’s producers] getting that kind of recognition and the power of that in terms of those coming up behind us. That’s the sweet part.

“The bitter part is the fact that we’re the first in 93 years,” he continues. “Anytime there’s a semblance of diversity during the [season], all these statistics are trotted out that are meant to celebrate these accomplishments, but they have the reverse effect on me.”

Asked what he hopes people will take away from Judas following a tumultuous 2020 when the killings of George Floyd, Breonna Taylor and others sparked global protests over police brutality and institutional racism, Charles King does not miss a beat. “I want the youth, definitely from the black community but also from all oppressed communities, to know and understand their power and excellence,” he says. “Can you imagine what would have happened had Fred Hampton been able to move forward with his rainbow coalition [of people from all backgrounds]? People even at a young age can effect change, just like we saw last summer. They can have power, particularly when they come together in numbers, to change history.”

The pandemic scuppered plans for a global theatrical release, and last December WarnerMedia blindsided the industry when it announced its theatrical-HBO Max simultaneous distribution strategy for every 2021 Warner Bros film, including the February release of Judas.

Warner Bros executives have struck “make-good” deals with their filmmakers, although Charles King declines to go into details. He says the strategy could have been communicated better, but insists Warner Bros has been a supportive partner and gives them props — in particular EVP of production Niija Kuykendall and president of production and development Courtenay Valenti — for boarding the film when they did.

“At the end of the day, we’re just excited the movie’s gotten out there and they supported it with a hell of a marketing campaign,” Charles King says. “I believe that now with the nominations, more people will see this domestically and definitely globally. Something as great as what Shaka produced — I always believe the cream rises to the top and I believe this film he and this team delivered will do that.”

Shaka King nods in agreement. “He said it all. Except that the cream is not mine, it’s ours.”