US director Kevin Smith talks about the state of independent film, his upcoming horror Tusk, meeting Game of Thrones author George RR Martin and why the Weinsteins passed on Clerks 3. 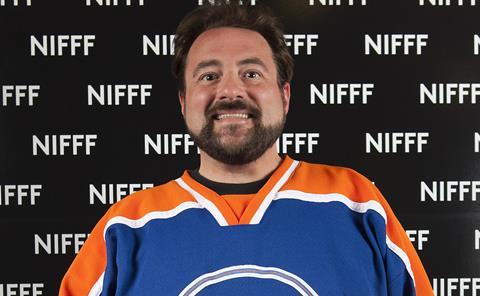 Screen: What is your current attitude toward the independent film business?

Kevin Smith: In 2011 when I walked away and said I was done making movies, I was absolutely frustrated with the financial process. It was mostly the marketing in terms of how ungodly expensive it had become to market a movie versus what it cost.

If you’re making a movie like Avengers and spending $100m or $200m, of course, you’re going to spend $50m marketing it. That makes sense.

But when you make a movie for $5m like Clerks II and they spend $10m selling it, it’s just the up is down, black is white, the art doesn’t make sense any more.

I think what it comes down to is that I had priced myself out of being creative. Based on the salaries that I had reached at that level of my career, suddenly you’re not asked to be brave. You’re asked to do what other people have done.

I can’t tell you how many times Bob Weinstein showed me other filmmakers’ movies. It was like ‘Why can’t you do this?’ That was frustrating. It was like I wish I could give you that. I wish I could make the mainstream movie but I can’t. The only movie I can make is a Kevin Smith movie.

So I walked away from it.

Screen: So what happened with Tusk?

KS: I hadn’t made a movies in three years. I fell in love with this dopey idea from a podcast and that turned into this movie. Suddenly, I found myself back making a film.

With Red State, we had self-distributed and that was real fun. It’s great to go to the belly of the beast, right to the core fan base, and skip all those dopey marketing costs and what not.

When it came to Tusk, the people I got in business with, Demarest Films, right off the bat they were like ‘We are going to want to sell this traditionally and go out the way most movies do.’ Right then and there I was like ‘I get it’.

Screen: So how will it be marketed?

KS: The only thing I pushed for was ‘This movie is fucking weird, man. Nobody is going to be able to sell this correctly except somebody that sells weird films.’

I pushed really hard to be with A24 Films in the States. Thankfully, Demarest teamed up with them. I know they’re not going to spend a bunch. I’ve been with those cats in meetings.

I heard how they approached Spring Breakers. They’re not over-spenders. They’re a brand new company and all they do is put out interesting, fucked up films.

They remind me of Miramax back in 1992 to 1994, right before the Disney purchase. There was nothing wrong with the Disney purchase. It afford Harvey and Bob (Weisntein) the opportunity to make way interesting films. That’s how I got through the door. Miramax had just been bought by Disney.

In the press at that time, they were saying ‘Now Miramax is going to go soft’. Fortuitously, we were in Sundance and Harvey, I guess, made the statement ‘Look, we’re not going to go soft. We may be owned by Disney but we picked up the filthiest dirtiest looking American film [Clerks] there is.’

I got in through the door thanks to that corporatisation of indie film. When I met with the A24 cats, they reminded me of Harvey back in the day in terms of it’s easy to make a big noise. You don’t have to spend to do that.

They know what they’re doing with social media and they know I am real tapped in as well. Sony International picked up for the rest of the world. I talked to those cats about marketing and they’re following in the path of whatever A24 is going to do.

Screen: Was it enjoyable to be back making films?

KS: It was astounding. It was just like doing it for the first time. I hadn’t done it in three years. I approached it completely differently. It was born out of collaboration.

I sat around on a podcast with my friend and we goofed around about ideas and then I went and wrote a script. There was no such thing as ‘I am in charge and everybody listen to me.’ I was open to any suggestion and because of that, we have this wonderful Mulligan stew of a movie that is honestly the best thing I have ever done - certainly the most interesting.

When I was a kid, before I made Clerks, the movies I loved were by David Cronenberg and David Lynch and the Coen brothers. The words we used to describe and the highest review we could ever give a movie when we were kids was ‘that was fucked up.’

I never could make one of those ‘fucked up’ movies…now, 20 years on, I can’t really tell the story of my youth any more. You’re left with 20 years of a skillset of knowing how to make movies but not that personal thing to say that put you on the map in the first place. That’s why I walked away.

Then I realised there are people who make movies dude, movies that you have fallen in love with over the course of your lifetime, that didn’t pull it from some deeply personal place. Just because Clerks came from your real life doesn’t mean that you can’t just fucking make shit up.

It [Tusk] was so much damn fun.

Screen: Is there any chance the Weinsteins will be involved in Clerks 3?

KS: No, they passed. I went in with a $6m budget and they were, like, ‘Oh no Kevin, this is too high’. Bob offered us distribution but they weren’t going to finance it.

Screen: George R.R. Martin, creator of Game Of Thrones, is a fellow guest at Neuchâtel. Have you met him yet?

In Fantastic Four issue 3, he’s got a letter in it. I was telling him about reading the fan letters he had written. He was talking about the early days of comic fandom. I was like ‘Dude, you were there for it!’

I look forward to picking his brain on the geekdom level. This is a man who has been doing sci-fi conventions and comic cons before I was born for heaven’s sake!