Swedish TV and film production company Yellow Bird is moving beyond its Nordic Noir roots with an ambitious slate mostly for the small screen. 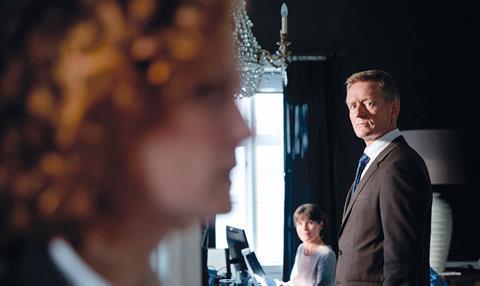 Yellow Bird, one of Scandinavia’s most successful production companies, is looking at more than just Nordic Noir. “Scandinavian crime has been a core for Yellow Bird, but we also want to branch out and try new things and new genres,” chief creative officer Berna Levin says. “It’s unlikely we will do a high-concept comedy or something. We’re branching out by doing hybrid genres.”

The Stockholm-based company, part of Banijay Zodiak Nordic Group, built its reputation with films and TV series such as the Swedish-language Millennium trilogy, Wallander and Headhunters. Now its diverse slate includes political thriller series Occupied and 2020, fantasy-drama series Hidden, and several English-language projects, including a series based on Karin Slaughter’s Will Trent series of crime novels.

Now ready for delivery - and being launched by Zodiak Rights at Mipcom - is Asa Larsson’s Rebecka Martinsson Series, a set of four 90-minute episodes based on Larsson’s novels about a tax attorney who returns to her home town in the north of Sweden to explore local crimes.

Season two of Occupied is currently shooting and is proving almost too timely. “We tend to plan for things and then they happen in real life,” says executive producer Marianne Gray. “It’s a breakdown of democracy. The starting point is a little bit in parallel of Brexit, a situation nobody wants to be in charge of. It’s amazing how reality can catch up to fiction.” Again, Zodiak is handling sales at Mipcom.

One original story is 2020, about complex politics and a mystery in Nuuk, Greenland during an international Arctic Council Meeting. It will shoot in 2017 in Sweden and Iceland with some second-unit work in Greenland. Yellow Bird executive producer Soren Staermose will take meetings about 2020 in Mipcom. “Like Occupied, it’s very contemporary,” he says.

Also in development with writers Filip Alexanderson and Anoo Bhagavan is Hidden, a suspenseful drama series with a fantasy twist; and Cold Cuts, following a troublesome unit of police officers investigating old murder cases. English-language projects on the Yellow Bird slate include Devil’s Sanctuary, which UK screenwriter Charlie Fletcher is adapting from Marie Hermanson’s novel about a nightmarish Alpine clinic.

Thriller series Infidels is being financed as a partly UK-based project, with UK writer Christian Spurrier working on the pilot. “It’s a very smart, very intelligent political cyber-thriller; it will be incredibly current,” says Levin.

The English-language adaptation of Henning Mankell’s Wallander starring Kenneth Branagh, which was produced in partnership with Left Bank Films and aired on the BBC, helped Yellow Bird discover the potential for more international co-productions. And growing ambitions mean moving beyond local languages. “We have to expand, we can only get so big here,” Gray observes.

Even when the company sells on formats or remake rights, it remains involved. “We’re not just selling formats. We are involved in their production,” says Yellow Bird managing director Johannes Jensen. The company is planning US remakes for Headhunters and Occupied.

Yellow Bird has more TV projects in the works than feature films. “It is not a conscious decision to move away from features. It is just that right now television is offering more opportunities and freedom for us,” Levin explains. “It’s the market’s fault. Television now is so exciting and fantastic, and the opportunities are phenomenal.

“Our best shot at Yellow Bird is to stay true to our roots of who we are, keep the level high,” she continues. “If we come to the market in English with something that has a Scandinavian twist, that will hopefully cut through the noise.”

Jensen agrees the opportunities have grown internationally: “The demand for Scandinavian content is increasing, and also the new SVoD players offer a fundamental change. That’s created so much opportunity.” He points to one key partner, Modern Times Group’s ambitious VoD company Viaplay, which has backed Yellow Bird projects including Occupied, Cold Cuts and Hidden.

Levin says that even with Yellow Bird’s increased ambitions, the company’s producers will retain its special kind of passion. “We have always said the most important thing is that one of us has to fall in love with the project. We don’t want to change the DNA of what we do - for Yellow Bird there will always be some freaky, dark, edgy material and it will be very character-driven.”