Screen digests the Academy Awards, which saw ’Parasite’ cause a huge upset by winning four prizes, including best picture. 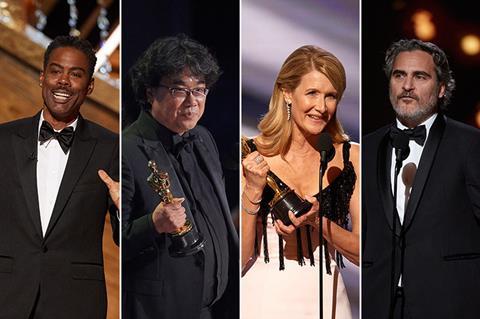 Parasite’s win in a game changer

In becoming the first non English-language film to win best picture, Parasite has shown filmmakers from around the world that anything is possible: stories don’t have to be rooted in Americana or English-speaking culture to win the big prize.

Parasite’s Oscars triumph speaks not only to the imagination and drive of CJ Entertainment and the film’s backers and North American distributor Neon, who got on board the film at script stage, but to the Academy itself.

The body nominated it, and, through the somewhat baffling preferential voting system used to choose the best picture winner, pushed it past the finishing line. Will Parasite’s win usher in a new era of foreign titles competing for the big Oscar prizes, or will it be a one-off?

Don’t count out the streamers

Netflix had a quiet night with two wins – for Marriage Story’s Laura Dern and doc American Factory, while The Irishman went home with nothing.

However, this wasn’t entirely unexpected as the season wore on, and doesn’t mean the streaming giant will go away in awards season anytime soon. It has only been doing this for three years and has already won major Oscars and earned dozens of nominations.

Let’s not rule out the other streamers, too. Amazon Studios is always a consideration, and now we have Apple in the mix, Hulu stepping up after being a major buyer in Sundance 2020 - where they bought what many said was the best doc of the fest, Boys State - and HBO Max launching later this year.

A proper host is required

The show desperately needs a good host. Despite its good heart and message of inclusion, this year’s telecast was scrappy and tonally all over the place. The lack of host means there are plenty of stars on stage, but many just for a matter of seconds, with viewers constantly having to readjust to a new voice and new style of delivery.

For next year, the Academy could do worse than look to one of the presenting duos from this year’s ceremony, with both Steve Martin and Chris Rock (both former solo hosts), and Kristen Wiig and Maya Rudolph getting big laughs on the night.

The power of campaigning

Parasite’s wins were not just a triumph for an exceptional film, but also to the power of good old campaigning. In an interview with Screen in November, Bong Joon Ho revealed he had done more than 1,000 interviews promoting the film since its debut in Cannes back in May and he’s been a regular on the awards Q&A circuit.

Conversely, Bong’s heavyweight US competitors Martin Scorsese and Quentin Tarantino, being well known to Academy voters, were perhaps more selective in their promotional activities. This was certainly true outside of the US, which proved a risky strategy given the increasingly international profile of the Academy’s membership.

The most memorable speeches and presenters

After his powerful remarks about the need to dismantle systematic racism at the Baftas last week, Joaquin Phoenix made headlines again by using his inevitable Joker best actor speech to extol the virtues of veganism, imploring the crowd to reconnect to “the natural world” and giving a graphic description of how cows are artificially inseminated to give birth and produce milk for human consumption.

Elsewhere, some of the presenters touched on this year’s much-discussed diversity issues. Steve Martin and Chris Rock, opening the ceremony, joked about the lack of black acting nominees, with Rock saying: “Cynthia [Erivo] did such a great job in Harriet hiding black people that the Academy got her to hide all the black nominees.”

Taika Waititi meanwhile, winner of best adapted screenplay for Jojo Rabbit, paid tribute to “all the indigenous kids in the world who want to do art, and dance, and write stories.”

One of the show’s oddest moments saw Eminem perform his Oscar-winning 2002 song Lose Yourself, leading to confused looks from Martin Scorsese, among many others, in the audience.

Jonathan Pryce, Cynthia Erivo, Anthony Hopkins and Florence Pugh may have lost out on the acting awards but there were a string of British winners in key technical categories.

Roger Deakins won his second Oscar, picking up best cinematography for 1917. His 2018 win for Blade Runner 2049 saw him end a streak of 13 unsuccessful nominations. Costume designer Jacqueline Durran won the Oscar her work on Little Women, her second after Anna Karenina in 2013

Dominic Tuohy was nominated twice in the visual effects category for Star Wars: The Rise of Skywalker and 1917, sharing the award for the latter with Guillaume Rocheron and Greg Butler. Mark Taylor and Stuart Wilson also picked up best sound mixing for Star Wars.

In addition, Learning To Skateboard In A Warzone (If You’re A Girl), produced by London-based Grain Media, won best short documentary.

Parasite’s win ensured that for the sixth year in a row the Bafta best film winner – in this case 1917 - did not go on to win the best picture Oscar. On one hand this is a positive, considering the somewhat tedious crossover between the Baftas, Globes and Oscars in the acting categories. Bafta is less predictive than ever, for best picture at least.

The win for Parasite is also a possibly a reflection of the work the Academy has done to diversify its membership, although it still has a long way to go (the Academy’s latest membership intake – to be announced this summer – is expected to show it is inching towards parity). After this year’s diversity fiasco, it’s clear Bafta needs to follow suit and urgently diversify its membership and/or its voting process.

Adopting the preferential voting system for best picture that has been in place for the Oscars since 2009 could also be an interesting move for the UK body as it works on reforming its voting processes. The preferential voting system sees voters rank all the best picture nominees and only if the number one choice achieves more than 50% of the vote does that film win. If not, the film with the least number of number one votes is eliminated and the film voted number two by those voters immediately comes into play. And so the process continues until one of the nominated films has snagged 50%. In short,  it’s complicated but not that complicated.

A win for Cannes

Finally, Thierry Fremaux will have toasted Parasite’s triumph after it became the first film since 1955’s Marty to win both the Palme d’Or and best picture. While Venice and Toronto are increasingly seen as the top festivals to launch an heavyweight awards contender, the noms and wins for Parasite, Once Upon A Time In Hollywood and Pain & Glory this year show a Cannes premiere is still a powerful way to debut an Oscar hopeful and that those films can last the distance.