Montenegrin director Marinovic’s debut feature is in competition in Sarajevo. 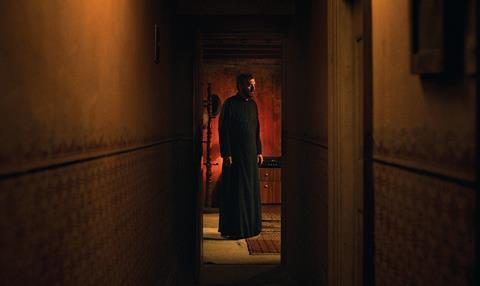 Montenegrin writer-director Ivan Marinovic graduated in film directing at the Prague FAMU. His first feature film The Black Pin, which world-premieres in Sarajevo Film Festival’s competition, is a comedy-drama about a priest who becomes an obstacle to a large property sale in a small island parish.

Marinovic spoke to Screen about his choice of actors and production conditions in Montenegro.

Your film deals with traditions and corruption in Montenegro. This kind of film is rarely made without a strong dose of sarcasm, but yours is almost devoid of it.

While writing The Black Pin, I didn’t go for the trademarks of the genre. My focus was on finding what is authentic about the place I am coming from, and I wanted to confront everything that personally disturbs me about it. Only after writing the first draft I realised that the amount of absurdity that comes out of that mentality left me no choice but to make it a comedy. The country is simply rich with contradictions to explore, so I didn’t have to force sarcasm into it, I just had to paint what was already there.

The Black Pin deals a lot with ignorance. That is what comes out of the mixture of tradition, filled with superstition, and the corruption that people play along with in order to survive. While testing I showed the film to a couple of friends and journalists. Most of them were laughing at the right spots, but one journalist told me that the film deeply moved her, and that she suffered throughout it with the main character, despite the humour of it. To my question why, she said that it made her think of how impoverished and lost our people are.

You have an interesting cast, from regional stalwarts like Croatia’s Leon Lučev and Serbia’s Bogdan Diklić, to the lead Nikola Ristanovski from Macedonia, who is an excellent actor but not that widely known.

I wanted to cast Nikola Ristanovski years ago, in a film that never happened. While getting to know him I realised how far he can go and how devoted he really is. As soon as I started writing The Black Pin he was in my mind for the main role. Our collaboration was fantastic, and I am very proud of the result. Audiences outside of Macedonia don’t really know him, so I hope that this will also be his breakthrough film.

Lučev’s and Diklić’s commitment to the project was incredible. They worked hard in preparation, especially on the level of language and dialect. I am particularly happy with how we blended all those experienced actors with Montenegrin actors, because for most of them it was their first time on film.

Tell us something about the visual style. In addition to gorgeous exteriors, the interior scenes seem to have been particularly carefully designed.

DoP Đorđe Arambašić and I worked a lot on shot lists and floor plans. It was important to have a clear analysis of the material. When we arrived on locations we decided to dismiss the shot lists, and to adapt to what we have instead. The analysis though remained in the back of our mind. Since I grew up around those places, the familiarity of it made the process very quick. That flexibility in our approach paid off.

The locations that we were shooting in were precious, they are centuries old, and the painted decorations in the interiors go back to the beginning of the 20th century. Those houses and their windows are very carefully positioned in respect to the sun, so in some cases we insisted on building authentic atmospheres by natural light.

Directing-wise, I always tried to separate Peter from the rest of the world. The film deals with his horrible feeling of not belonging to the only place where he must belong - his home. I tried to illustrate that distance, to isolate him visually with different tools, and to explore his loneliness.

What is the production situation like in Montenegro? How did you produce and finance your film?

Montenegro is supposed to get a Film Centre in the next few months. The money that we could get to date depended on the Ministry of Culture, and their budget was always very low. Besides getting minority co-production support from Film Centre Serbia, I had to spend two years chasing sponsorships and logistics that I could get for free.

It was a very risky endeavour because we knew that we had to shoot with the micro budget that was in place, and that we would have to figure out post-production later. While pitching and presenting the film together with my associate producer Mina Đukić, we fooled around saying that we are a production that counts on miracles, that they are an integral part of our plan. It really turned out to be like that.